Plans were submitted to Cleveland’s Department of Building and Housing (B&H) for an Amazon Delivery Station offering at least 200 jobs to be located at 400 Heidtman Pkwy. in the Industrial Valley next to Cleveland’s Slavic Village neighborhood. However, not everyone at the city who was informed of the plans realized it was for Amazon — unless they read the fine print.

In the corner of the elevation and floor plan drawings submitted to the city by architectural firm Richard L. Bowen & Associates, the documents clearly show “Amazon” on them. This facility, proposed to measure 112,000 square feet, is one of six large Amazon distribution centers built or planned in the Greater Cleveland-Akron metro area.

The first three were built in Euclid, North Randall and Akron. NEOtrans reported in March that one of the six will be at the Madison Industrial Park on Cleveland’s West Side. The last site isn’t known but locations in Bedford, Parma or Lorain are rumored.

An email sent to Richard L. Bowen & Associates’ general e-mail address seeking comment and more information was acknowledged by their Director of Marketing Donald Butchko but not responded to prior to publication. 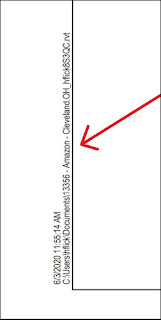 Each of these large Amazon distribution facilities is identified as DCL1, DCL2, and so on up to DCL6. DCL is an abbreviation for “Delivery Center CLeveland.” The proposed facility on Heidtman is identified in Building and Housing’s public records as “DCL6.” The architectural drawings were posted as attachments in the public records link.

The documents posted at the city’s B&H public access portal don’t indicate how many jobs may be offered. But the site plan shows parking requirements with 1,158 parking spaces with 261 spaces for employees, not including hundreds of spaces for delivery vans for Amazon drivers and contract delivery services.

Ward 12 Councilman Anthony Brancatelli said he was recently contacted by an architectural firm that he wouldn’t identify. The firm was asking about bout zoning, building and design review restrictions at what is called the Job Ready Site in the Cuyahoga Valley Industrial Center (CVIC).

The CVIC was a former International Steel Group coal/coke plant that was demolished and since remediated and prepared for redevelopment by the city. Several years ago, the Job Ready Site was promoted as having the ability to accommodate 750,000 square feet of new manufacturing space and 1,000 new jobs.

Brancatelli and other city officials were informed that the architectural firm had a client seeking to build a distribution center that would create at least 200 jobs and use all of the remaining 40 acres of the CVIC. Two comparatively small portions of the CVIC measuring about 10-12 acres each were sold off in 2017 for an Ohio Department of Transportation maintenance facility and for Ohio High Reach to relocate its business from Valley View.

“I do not know who the end user is specifically, nor has any proposal been in front of (the city’s Department of) Economic Development or the CCDC (Cleveland Citywide Development Corp.) committee yet, so this is all speculative at this time,” Brancatelli said.

“I did inform the architect I am in favor of a distribution center at this location and would fully support this development,” he added. “The Job Ready site is an ideal location for this use and with all the wonderful redevelopment work going on in Slavic Village, including the rebuilding of Fleet Avenue, this location has been garnering a lot of attention.”

No request for public financial assistance has been submitted to the city for developing the balance of the Job Ready Site, Brancatelli said. However, the city could offer its usual incentives such as tax abatement, the Job Creation Incentive Program, the Vacant Property Initiative, equipment loans, working capital loans and so on.

He noted that the city also has committed to resurfacing Independence Road this year in anticipation of the development of the remainder of the Job Ready Site and to support existing industrial users in the valley such as ArcelorMittal Steel and others.

Further, the city also has committed this year that design and engineering will be completed for the Downtown Connector Trail in partnership with the Cleveland Metroparks and Canalway Partners making this site accessible to the Towpath Trail and downtown. The Downtown Connector Trail would be built right next to the Amazon distribution center, making it accessible to workers without a car.

“This would be a huge win for Slavic Village and our city,” Brancatelli said.

The Greater Cleveland Community Improvement Corp., a nonprofit corporation formed in June 2009, owns the CVIC property. The real estate listing for the 40-acre Job Ready Site shows that the property has been under contract (a purchase agreement) since at least May 21 when the listing was last updated. The owner was asking $5 million for the property.

Interestingly, the Greater Cleveland Community Improvement Corp. was tax-cancelled by the Ohio Secretary of State on June 12, 2019 for failing to file with the state a statement of continued existence.

The company’s agent is ARA Land Recovery LLC, attention Michael Cantor — the managing director and principal at Allegro Realty Advisors. Cantor did not respond to an e-mail seeking comment prior to publication.