Although Cuyahoga County leaders officially remain mum on the subject, it looks like county administration offices may be moving to the corner of East 9th Street and Euclid Avenue after all. But it’s not the same destination desired by the previous county commission government.

A real estate study conducted in late-2011 for the county by Allegro Realty Advisors Ltd. recommended selling off 22 of its 66 properties to save $91 million. Most of the savings for the county would come from selling properties or terminating leases at these five sites:  current administration building on Ontario Street, the ex-Ameritrust Center (aka Breuer Tower) at East 9th and Euclid, the Sterling Building on Euclid in Playhouse Square, the old Juvenile Court building on East 22nd Street and Reserve Square on East 12th Street.

Two top county officials — a councilperson and a department head — spoke off the record in pointing to the Huntington Building, 925 Euclid Ave., as the site where as much as 300,000 square feet of county office space and about 1,000 county employees could be consolidated. The address is across Euclid from the Breuer Tower and Cleveland Trust rotunda — where the county previously sought to relocate. That property’s 2005 purchase was approved by the former county commissioners four years before they were swept out of office by voters installing a reformist charter government.

The 1.3-million-square-foot, 1924-built Huntington Building can meet county site-selection goals that might otherwise seem contradictory — an affordable space that provides a magnificent architectural experience for visitors having to do business with the county. The Huntington Building was purchased in 2010 by Optima Ventures LLC for a bargain $18.5 million, or just $14 per square foot. The building has a majestic but now vacant lobby, which when it opened 88 years ago was the largest bank lobby in the world. It features marble Corinthian columns, barrel-vaulted ceilings and colorful murals by Jules Guerin (see photo below).

Also the new location for consolidated county offices will need to offer large floor plates and the possibility for natural lighting to reduce energy costs. The 22-story Huntington Building offers floor plates measuring 65,000 square feet (compared to less than 9,000 square feet of usable space per floor in the Breuer Tower) in addition to numerous light wells. After financial services firm Ernst & Young and law firm Tucker Ellis & West move out of the Huntington in spring 2013 to Flats East Bank, about half of the building will be vacant. Huntington Bank already moved out in 2011, relocating its regional headquarters with 100,000 square feet of offices to 200 Public Square. The Huntington has the most vacant office space available downtown.

“We have to keep costs down so (that means) we’re not going to build new,” said the department head who did not wish to be named. “We’re going to move into an existing building. The Huntington Building has the vacant space and it has very striking public areas which is what (county Executive) Ed FitzGerald wants.”

A county councilperson agreed that the county offices will move into an existing building downtown to save money, but declined to identify the Huntington. The councilperson said the owner of a large downtown building has already made “a very good offer to the county.”

Other than the Breuer Tower, which the county intends to sell, the only downtown building with enough contiguous vacant space, large floor plates and a lobby offering numerous customer-service counters for conducting county business is the former East Ohio Gas building, 1717 East 9th at Superior. But media reports indicate that K&D Group may acquire that office building and convert it into apartments.

The Huntington offers direct transit access, a major site-selection goal for the county, as the building’s Euclid entrance is a few feet from a station on the HealthLine bus rapid transit. Parking is another key site selection goal. The building has a parking garage on the north side of Chester Avenue that is connected via an underground tunnel into the Huntington’s basement retail arcade.

In the future, when county leases expire at Courthouse Square, 310 W. Lakeside Ave., and at the Marion Building, 1276 W. 3rd St., additional relocations could occur. Among them could be offices for the Fatherhood Initiative, Homeless Services, Invest in Children, Public Safety, Justice Services, Mediation, Emergency Management, Office of Reentry and the Witness/Victim Service Center. 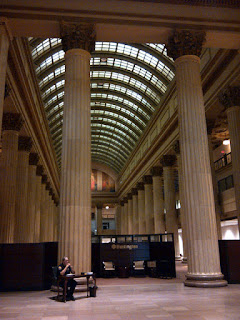