The 11-story Baker Building at 1900 E. 6th St. in downtown Cleveland enjoys a brighter future now that it’s in the hands of a deep-pocketed firm. But that future may not be imminent. And the delay has nothing to do with the global pandemic, according to a source familiar with the project.

Instead, the Walton Enterprises of Walmart fame which bought the Class C office building usually acquires and sits on older, sometimes distressed buildings before renovating them, said the source who was not authorized to speak publicly on the project.

“Walton’s typical play is that they wait and hold the property, usually an older building or distressed property for 24 months for redevelopment as a future boutique hotel,” the source said. It isn’t known why Walton waits or what is the significance of the 24-month hold.

That boutique hotel could be a 21c Museum Hotel, according to rumors shared by Crain’s Cleveland Business. Bentonville, AR-based Walton and Louisville, KY-based 21c did their first deal together in 2010, opening a new-construction boutique hotel in Walton’s headquarters city two years later.

The hotelier tends to locate in older buildings that are in need of preservation, like the Baker Building, and creates contemporary art museums in its facilities. The Baker Building is ideally sized for a boutique hotel like 21c. Although it is 11 stories tall, Baker is a skinny building measuring only 53,779 square feet, county records show.

Although the hotel chain has favored second-tier markets since its founding in 2006, it is also expanding into larger domestic markets like Chicago as of last year. Sites in Los Angeles, New York City and international locations are planned. That’s due to a capital infusion from multinational hotel firm Accor that acquired an 85 percent stake in the company for $51 million in 2018. Its only Ohio location is Cincinnati, so far.

Walton bought the Baker Building from local investor J. Scott Scheel, doing business as Diamond Investment Group, for $3.5 million through an affiliate called 1900 East 6th Street, LLC on Jan. 27. But the identity of the buyer remained a mystery until March 13 when the affiliate was listed publicly with the Ohio Secretary of State’s office.

On its state filing are the names of four Walton corporate lawyers or filing clerks — Christina Meeks, Bethany Marshall, Lynn Kariker and Sean Evans. No company executives or development-type managers were listed in any public documents associated with the acquisition, bolstering the possibility that Walton’s play is a buy-and-hold transaction.

“We don’t comment on rumors,” said Kiki McLean, director of the Walton Family’s political and communications office in Washington, D.C. When asked about the sale itself to a Walton affiliate, which isn’t a rumor, she replied “It’s not the sort of thing we comment on.”

The Baker Building was constructed in 1919 as the Fidelity Mortgage Building at the intersection of East 6th and Short Vincent Avenue, then a thriving mix of financial businesses, restaurants and nightlife. Today it is a hub of mid- and high-rise residential buildings, both old and new like The Garfield Building, The Leader Building and the new Beacon apartment tower.

In October 2019, the Baker Building went up for auction at the starting bid of $900,000, according to its deactivated listing at LoopNet. The office building with ground-floor retail was renovated in 1988, 2005 and 2012 with a new roof, modernized elevators, restored lobby, heating and cooling systems, plus a restored Greek classical sandstone facade.

The building is only 53 percent occupied with office and retail tenants like Teahouse Noodles, Dave’s Cosmic Subs, Sapporo Sushi, Moriarty’s Pub, Scheel Publishing, Hochberg & Co. as well as Kehoe & Associates, according to its recent sale documents. 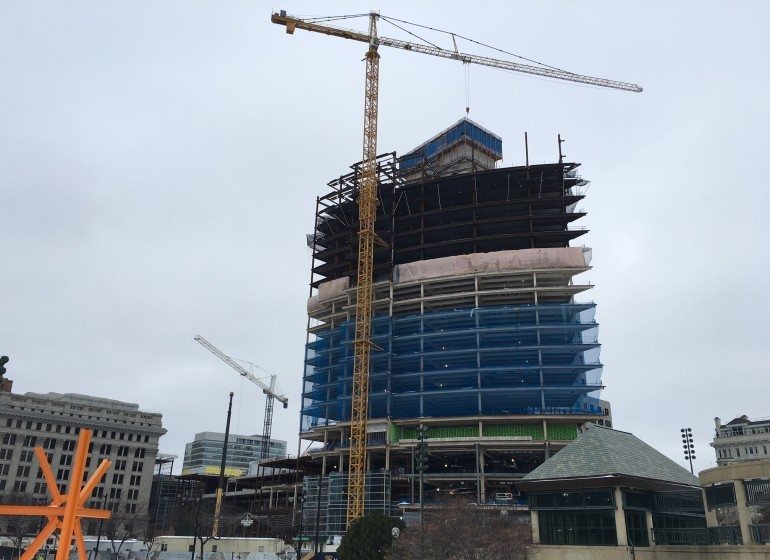 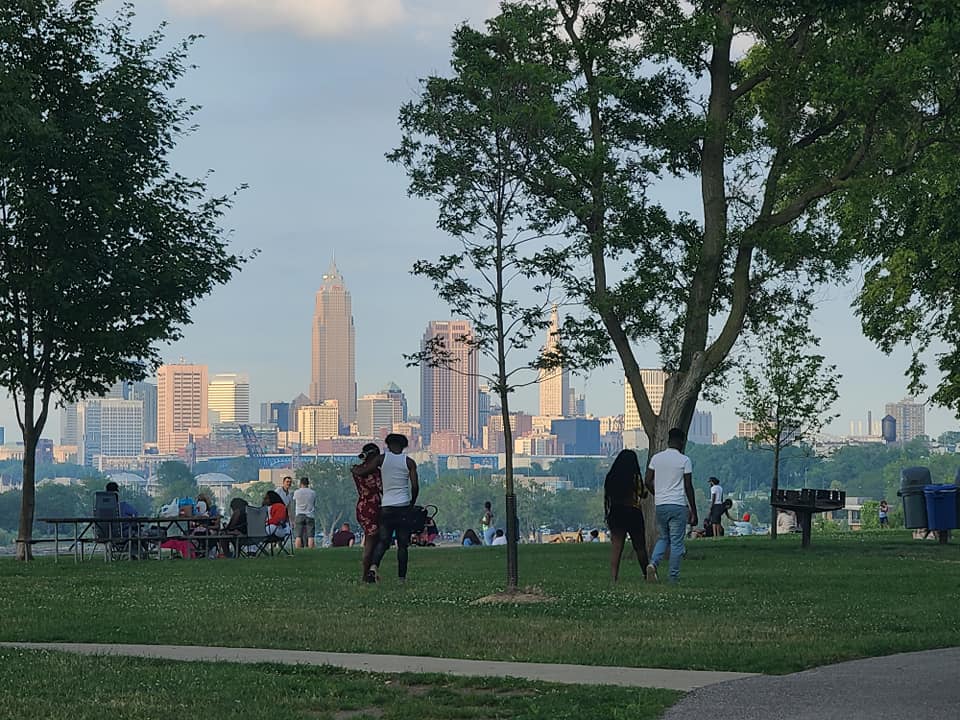 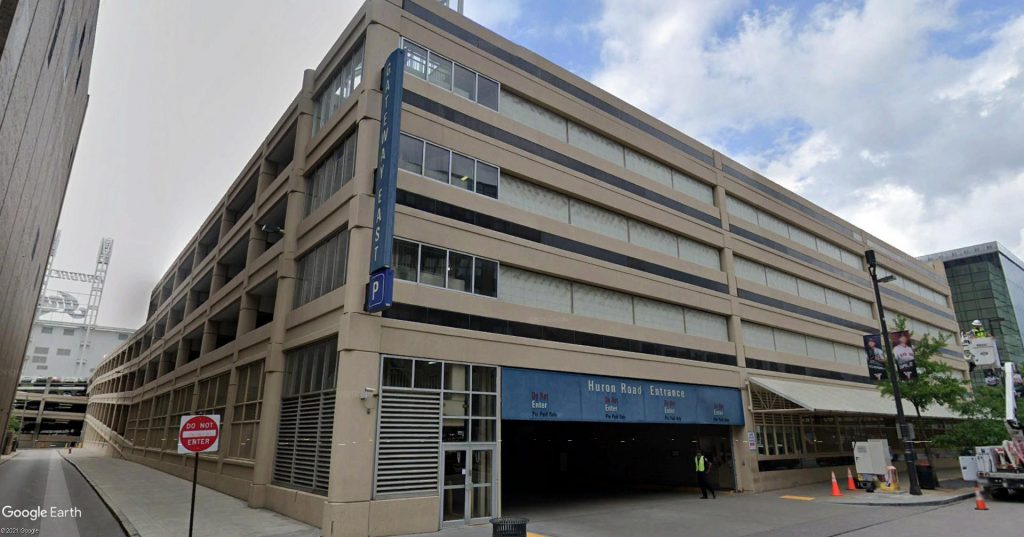 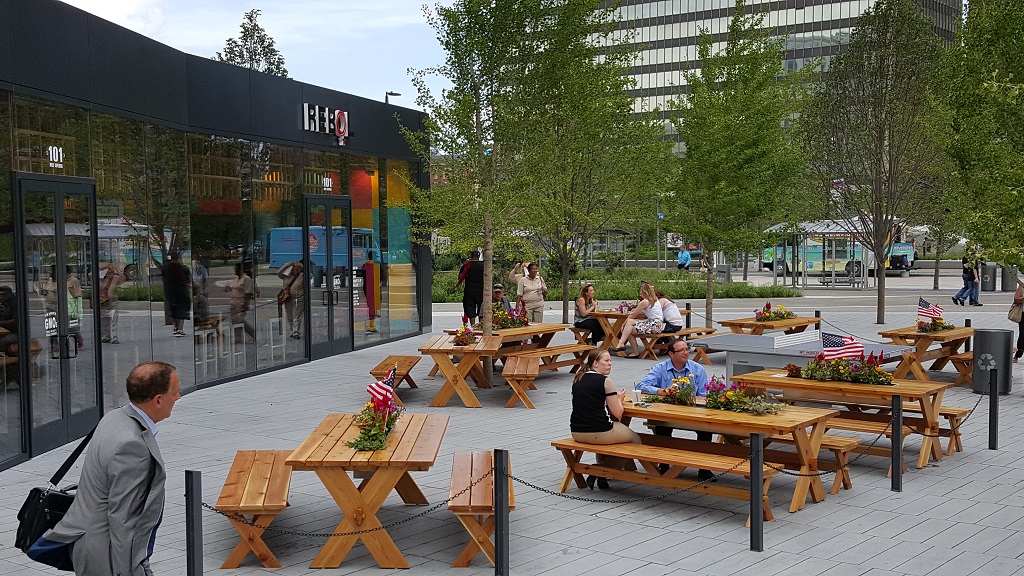