Some of Cleveland’s most ornate architecture succumbed to the almighty car in a large plot of land called the Superblock. The Superblock is located in downtown’s Warehouse District which, aside from the narrow river- and lakeside dock areas, was Cleveland’s first central business district starting in the early-1800s.

But as Victorian-era architecture was frowned upon in the Modernist era after World War II and streetcars gave way to buses and cars, buildings in the Warehouse District and especially in the Superblock began to fall.

Today, the Superblock, bounded by Superior Avenue, West 3rd Street, St. Clair Avenue and West 6th Street, has only one building remaining — a heavily modernized Gilman Building, 1350 W. 3rd. It is one of several in this block designed by famous architect John H. Edelman. Now, the Superblock is a mostly lifeless, windswept, 5.8-acre parking lot. It is downtown’s largest parking crater.

Because of the new Sherwin-Williams (SHW) headquarters that will tower above several blocks west of Public Square, there is now a realistic opportunity to cover most of the Superblock with more than just asphalt for the first time in more than a half-century.

Seeing structures rise where only one remains will be a good thing for the Warehouse District. How those buildings are designed could be a great thing — or a missed opportunity, said historic preservation consultant Steven McQuillin. 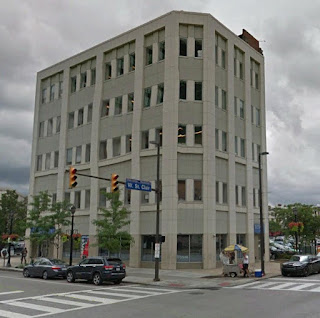 “The Gilman’s preservation will enhance the adjacent Warehouse District, and if combined with some innovative re-interpretations of lost landmarks by Edelman on the vast parking lots that comprise the balance of the site, could help make this new headquarters project highly innovative on a national level,” he said.

McQuillin?noted that SHW could attract many millions of dollars in state aid if the global coatings company acquired the Gilman and pursued an historic renovation of the building — and borrowed from its architectural guidance.

Furthermore, he said SHW could raise much more state assistance if it built new buildings around the parking structures to look like the historic structures that were demolished decades ago. That could include a?reproduction of Edelman’s?stunning Blackstone Building that stood just south of the Gilman until the early 1960s. He said original blueprints for the Blackstone are on file at the Western Reserve Historical Society.

“Retaining and rehabbing the Gilman could add millions in state funds,” he said. “Reconstructing the Blackstone Building might be an innovative demonstration project that could qualify for state preservation funds. Then selling air rights for apartments or a hotel above the office tower might be a lucrative move and lessen the need for public funding. You can get a federal income tax deduction for donating air rights.”

Those resources could be a way for SHW to make up for a $70 million state loan that the Ohio Development Services Agency put on hold a month ago due to revenue concerns stemming from the COVID-19 pandemic, he said. 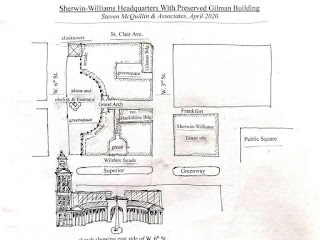 Although much of SHW’s new construction on the Superblock will likely be for a multi-level parking structure for potentially thousands of cars, there may be demands by the City Planning Commission to wrap parking structures in buildings or least facades that are designed to be respectful of their historic surroundings.

The principal building for SHW’s headquarters will rise on the former Jacobs Group-owned between Public Square’s West Roadway,?Superior and Frankfort avenues and West 3rd. As has been reported multiple times here on NEOtrans, while this 1-million-square-foot building may exceed 30 stories, it isn’t likely to exceed the height of any of downtown’s three tallest skyscrapers, all of which are located on Public Square.

Realife Real Estate Group is the latest owner of the Gilman. Realife bought it in 2018 from Stark Enterprises which had its headquarters there since 2004. The two parties got into a legal dispute earlier this year over nonpayment on a mortgage that Stark provided to Realife but the matter was resolved out of court.

The five-story Gilman Building with 14,632 square feet of office space and a 2,565-square-foot ground-floor retail space remains listed for lease with real estate brokerage Cresco, a division of Cushman & Wakefield.

The Gilman, built in 1882-83, is the only building still standing that was designed by Edelman.?The structure was built at 182-184 Seneca Street for the A.S. Gilman Printing Co., publisher of the popular weekly American Sportsman.

The surrounding area was a veritable “printers row” including the offices and printing presses of the Cleveland Plain Dealer, Cleveland Press and other publishing and printing companies, according to 100-plus-year-old Sanborn Fire Insurance maps.

In the early 20th century, the Gilman Printing Co. moved to a larger building at East 9th Street and St. Clair before relocating to the suburbs in the 1970s. It last building downtown was razed for the Bond Court office tower, now the AECOM Building, McQuillin said.

The Gilman was modernized with steel cladding in the 1960s, as were other Victorian-era buildings in downtown Cleveland, like the Schofield Building at East 9th and Euclid Avenue. But the recent renovations of the Schofield and other buildings show that they can be restored to their former grandeur.

Edelman’s fame among architects is a result of his service as mentor to Louis Sullivan, the Prairie School architect in Chicago who is known as the father of the skyscraper. Sullivan also coined the phrase “form ever follows function.” His life and works are extolled in the book “Louis Sullivan and His Mentor: John Herman Edelman, Architect” by Charles E. Gregersen. Sullivan, in turn, was a mentor to ‘starchitect’ Frank Lloyd Wright.

Edelman, an avowed socialist and accused anarchist, designed other beautiful buildings in the Warehouse District. One of his most celebrated works was the Blackstone Building which was an office building for professional services, namely architects and lawyers. But development of the Superblock should start with saving the Gilman, McQuillin urged.