Throughout the last two-plus years at the Sherwin-Williams (SHW) rumor mill, one of the favorite items of scuttlebutt has been the potential height of the new headquarters (HQ) building — or buildings.

Rumors have pegged the height of SHW’s tallest HQ structure ranging anywhere from 40 to as much as 55 stories. Depending on floorplates and floor heights, the base tower (having a Public Square address) was rumored to approach if not overtake the height of one or more of its Public Square neighbors. They are the 658-foot 200 Public Square, the 708-foot Terminal Tower and the 948-foot Key Tower.

One source, a specialty contractor, was instructed by SHW’s development team lead by a joint venture of Welty-Gilbane to prepare a bid for work on the HQ building. Their scope of work, the contractor was told, was to prepare for a building that rivaled the height of Key Tower.

And then there’s the latest rumor which goes in the opposite direction, height-wise. Three sources informed NEOtrans this week that SHW has considered two initial office buildings on its 6.8-acre HQ site. And neither one might top 30 stories, they said.

Specifically, the rumor has the base HQ building on the former Jacobs Lot on Public Square topping out at up to 27 stories. Averaging about 16 feet per floor, that could result in a building height of roughly 430 feet — barring any rooftop decorative elements. That would be equal in height to the Stokes Federal Courthouse at the corner of West Superior and Huron Road.

The second office building would be on the west side of West 3rd Street, between Superior and Frankfort avenues. It would top out at 20 stories, the two sources said. At an average floor height of about 16 feet, that might be approximately 320 feet tall.

It’s not the first time we’ve reported that SHW wasn’t interested in an HQ with a commanding presence downtown. After all, a visitor to downtown might have difficultly finding their existing HQ without directions. More than a year ago, NEOtrans reported that the conservative, if not stodgy SHW wasn’t interested in an “iconic” tower exceeding 40 stories on its proposed urban campus.

But there’s some substance behind this latest rumor.

A well-placed source in the SHW HQ team confirmed that when SHW was searching for a downtown HQ site, it asked respondents for proposals that included two 20-something-story buildings with a pedestrian connection between the the two.

How does that square with the latest information that geotechnical firm Ohio TestBor of Hinckley was drilling to bedrock at the SHW HQ site? City officials and drilling workers confirmed the drilling crews were boring multiple holes to identify the depth to bedrock at two potential building sites. One was at the former Jacobs Lot on Public Square and the other on part of the former Weston lots, a site just west of West 3rd.

Why would SHW’s HQ development team request drilling to measure the depth to bedrock if they weren’t planning on building structures taller than 30 stories?

After all, the rule of thumb is that a building shorter than 30 stories would be light enough so its foundation could be constructed of a less-expensive “floating mat” concrete pad. Otherwise, a taller and heavier building would require reinforced concrete caissons extending 200 feet or more to bedrock.

But that depends on the type of soil conditions below SHW’s proposed HQ site, a construction-engineering source said.

“Drilling to bedrock should indicate something larger, but even a 25-story building might require caissons,” the source said. “It all depends on the structural load paths and bearing capacity of the soils.”

In its permit applications to the Cleveland’s Division of Water Pollution Control and Northeast Ohio Regional Sewer District, Ohio TestBor said it would be drilling through sand and clay to bedrock.

Contractors working for SHW’s development team had been gathering core samples to learn about subsurface conditions below the Weston and Jacobs lots since November and December of 2019. More subsurface investigatory work was done in July 2020.

So if buildings with desired heights of about 300 to 400 feet tall couldn’t be supported by the soil conditions, SHW would have discovered it from that core sampling in late 2019 and mid-2020.

It also squares with what the Ohio TestBor drilling crews said in December. They said they weren’t taking core samples; they were measuring the depths to bedrock. SHW knew what they were getting into, soil-wise. Although the EnviroProbe workers drilling last month just east of West 6th and north of Superior were taking core samples — likely for a shorter structure.

And if the rumor is correct, that 27- and 20-story buildings are planned, what does that include?

It isn’t known if parking would be contained within the towers on both sides of West 3rd, or if levels of parking counted toward their rumored heights. If the rumored building heights were just for the offices and not the parking on the lower levels, it would make them taller than a building having just 27 and 20 stories of office uses.

SHW has said publicly several times that its HQ will measure about 1 million square feet — a figure that has never included parking. Every real estate insider NEOtrans has spoken with expects the SHW HQ to include a significant amount of structured parking — not just for many of the 3,000 HQ employees, but also to make up for the 1,000 surface parking spaces in the former Jacobs and Weston lots that will be developed.

So there could be one or more parking garages totaling thousands of parking spaces either within the frames of the new HQ office structures or in separate parking garages or both. Two thousand parking spaces could involve 700,000 square feet of structured parking, for example. Three thousand spaces could bring more than 1 million square feet of structured parking.

This rumor is the latest among several about the potential size of this Cleveland real estate whale. But, like the others, there are some legs to this rumor — and they’re not just caissons. Fortunately, each day brings us closer to seeing the actual plans for the HQ project. 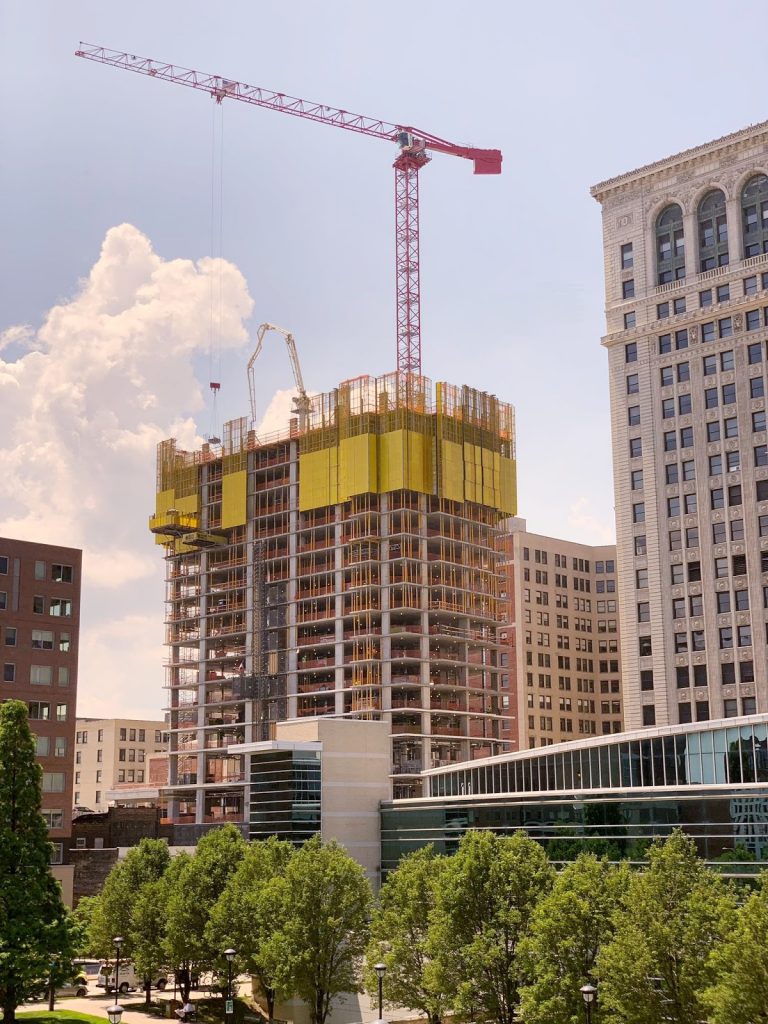 Most Downtown Cleveland's skyscraper builders took a nearly 20-year nap between 1992 to 2010. That was after they finished Key Tower and the Fifth… 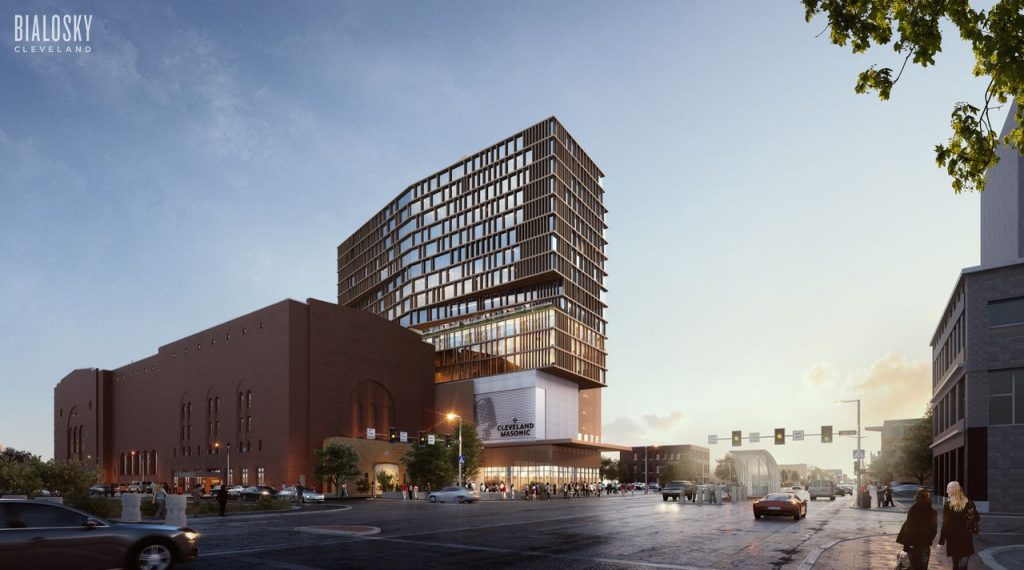 One thing's for certain -- the Coronavirus pandemic hasn't slowed the rapid spread of plans for high-rise towers in Cleveland. The latest is a… 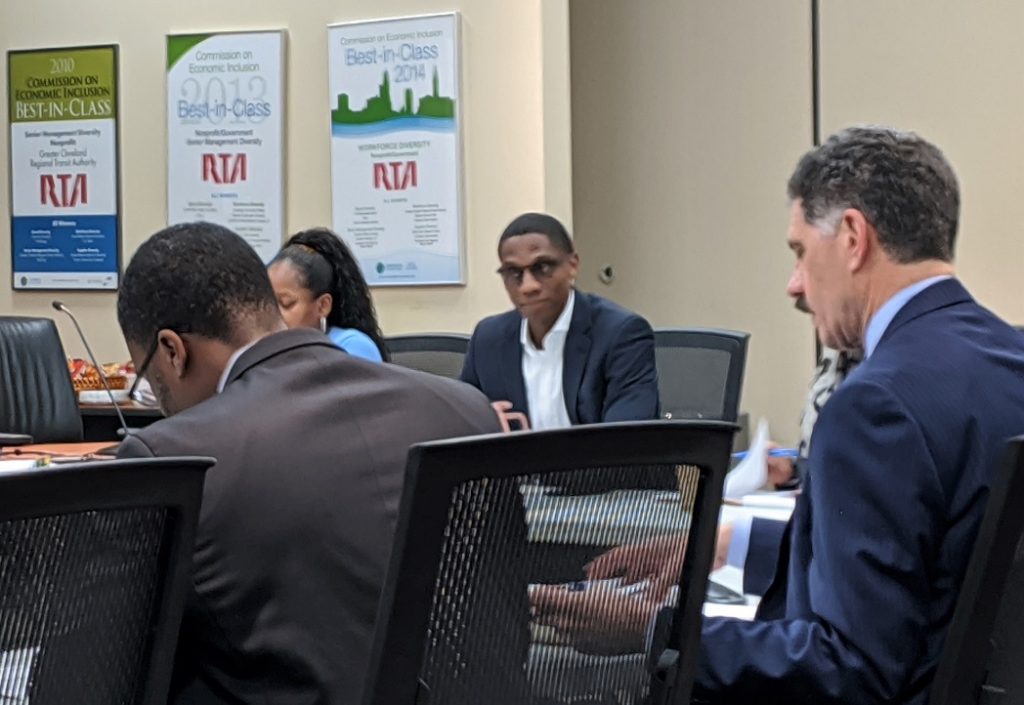 On March 24, the Greater Cleveland Regional Transit Authority's (GCRTA) Board of Trustees did two things it had never done before. One, GCRTA's board…