Skip to content
Share
A California-based real estate investor has purchased the Chicle Apartments and Chicle Townhomes (Chicle is pronounced “chick-lee”) from a local firm that renovated the former Chiclets gum factory and built the townhomes on Cleveland’s west side nearly 15 years ago. Little is known about managing member Krishna Venkatarama of Cupertino, Calif. or his intentions involving multiple properties at 10307-10335 Detroit Ave., in the Cudell neighborhood. On Nov. 25, Venkatarama and his partners acquired the properties near the West Boulevard Red Line rail station through three companies created in September.Chicle Luxury Apartments LLC bought from 10307 Detroit Ave Limited Partnership the 1888-built Chiclets gum factory that was renovated in 2005 for $4.8 million into 23 apartments and a ground-floor commercial space. The purchase includes 0.622 acres of land, according to the Cuyahoga County Recorders office.

On the same day, Chicle Land Development LLC bought from Chicle Land Investment LLC 0.884 acres of land on which 10 townhouses set. This transfer didn’t include the townhouses but it did include an easement for access to a driveway off Detroit Avenue owned by the Greater Cleveland Regional Transit Authority.

Also, on Nov. 25, a third company named Chicle Luxury Townhomes LLC acquired all 10 of the townhomes at the site. The townhomes, measuring anywhere from 939 to 1,300 square feet, were built 2007-10 by Kemper Co. and Civic Builders LLC. Betty Kemper founded Kemper Co. in 1994. Kemper also was responsible for renovating the Chicle Building.Three of the townhouses were sold years ago as condominiums to individual persons while the others were rented to residents for years by Chicle Land Investment LLC. Units 12, 14 & 28 were sold July 31, 2018 by individual persons for $169,900, $169,000 and $159,750 respectively to Chicle Townhomes LLC, formed by Betty Kemper.
Ad.

County records show those townhouses as well as the rented townhomes owned by Chicle Land Investment were all sold to Chicle Luxury Townhomes last week.

Sale amounts were not publicly available. However, Venkatarama’s three companies each recorded mortgages with Cuyahoga County on Nov. 25. Two mortgages, both in the amount of $672,000, were secured from Conventus LLC of San Francisco on Nov. 21. One company securing the mortgage was Chicle Luxury Townhomes and the other was Chicle Land Development. The loans mature on June 1, 2021. 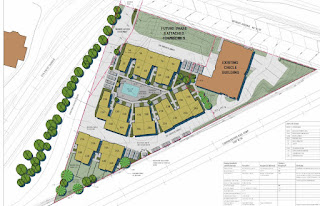 The third mortgage recorded last week, but signed Oct. 8, was in the amount of $1.5 million for Chicle Luxury Apartments, made by Sabal Capital II LLC of Irvine, Calif. The mortgage matures on Dec. 1, 2029.

Additionally, on Dec. 2, Venkatarama filed with the Securities and Exchange Commission (SEC) a Form D notice of an exempt offering of securities by Chicle Luxury Apartments, LLC. The total amount of securities available and sold was $400,000.

According to the Form D notice, executive officers of Chicle Luxury Apartments, LLC other than Venkatarama are residents of Calgary, Alberta, Canada and Sunnyvale, Calif.

Future plans for the site are not revealed in any known public records. That includes a reciprocal easement agreement by and between Kemper’s Chicle Land Investments and Kemper’s Chicle Townhomes filed with Cuyahoga County in 2007 and amended on Nov. 21, 2019 before the sale to Venkatarama’s companies.
Ad.
Questions about future plans involve whether the townhomes will be rented as apartments or sold as condos. Another question is whether additional townhomes will be built.The original plan for the site in 2005 had 36 townhomes in the first phase and another eight townhouses along Detroit Avenue to be built later. Only 10 townhomes were built, shortly after the Chicle building’s residential conversion. Some of the townhomes yet to be built would have offered up to 2,200 square feet, according to LDA Architects.
A voicemail left at a number listing to Venkatarama as well as a phone message left with his wife at their home in California were not returned prior to publication.
The principal place of business for Chicle Luxury Apartments listed on the SEC Form D is a residence on Glendora Lane in Parma Heights. That home was purchased in June 2018 by Tracy O. Mooney, public records show. A voicemail message left at his home was not returned before this article was published.
Interestingly, the June 2018 deed to Mooney’s newly purchased Parma Heights home was prepared by attorney Anthony Asher, 4760 Richmond Road, Suite 200, in Warrensville Heights, according to the Cuyahoga County Recorder’s office.
Asher is founder and chairman of the Weston Group, one of Northeast Ohio’s largest real estate investment, development and property management firms. The address that Asher listed on Mooney’s deed was that of Weston’s corporate headquarters.
Very few public records could be located to reveal current or past real estate investments or ownerships by Venkatarama. One that was found was another SEC Form D notice from last year.
Venkatarama was listed as manager of CG Apartments, LLC, a Florida limited liability company that in November 2018 sold $600,000 in $50,000 increments from a total of $700,000 in securities, according to the SEC filing. Other executive officers of CG Apartments, according to the filing, were residents of Coppell, Texas and Frisco, Texas.Staff at the Detroit Shoreway Community Development Organization, which includes Cudell Improvement Inc., were not familiar with the sale of the Chicle properties or with Venkatarama’s intentions at this time and thus could not comment on the transaction.