For more than a month now, real estate professionals have been watching the activity on the Jacobs Group/Weston Group-owned parking lots, located on the west side of Public Square. When asked what they think of it, their general response is “there’s definitely something going on there.”

Because of the amount of money being spent — perhaps up to $10 million so far.

And when a company shells out that much money to measure, poke, drill, extract, review, document, analyze, repair, model, simulate and design stuff in around those windswept parking lots, that company is showing that it is pretty serious about that site.

That’s especially true when said company isn’t doing work like that at any other site in Greater Cleveland or anywhere else, according to multiple sources. Well, apparently Atlanta — OK, just kidding!

Of course, that company is Sherwin-Williams (SHW) which has been working toward finding a site for its new 1.8-million-square-foot headquarters plus research and development (HQ+R&D) facilities.

How do I know it’s SHW? Because three sources who have been directly involved at the highest levels of SHW’s HQ+R&D efforts disclosed that SHW has favored the Jacobs/Weston lots for a long time.

Then, on Nov. 11, another source contacted me to say that?SHW would be filing city permits?later in the week for buying properties west of Public Square. Sure enough, at the end of that week, a title company named First American Commercial Due Diligence Services filed 12 certificates of disclosure regarding the purchase of the Weston lots.

Those certificates are sometimes filed by prospective commercial property buyers. On the other hand, for residential purchases, certificates of disclosure must be filed to get violation/condemnation and legal use information from the city.

According to a real estate expert who helps companies conduct their due-diligence of desired development sites, SHW has likely spent anywhere from $5 million to $10 million on the Jacobs/Weston site so far.

Granted, some of that amount — especially for legal fees and architect’s fees — was not for site-specific work. That amount was likely in the $2 million to $5 million range, he estimated.

The legal fees are probably the largest component at this point. SHW’s legal counsel during the HQ+R&D project is Korman Jackson & Krantz (KJK), located at One Cleveland Center in downtown Cleveland. KJK is a prestigious, well-respected firm.

And they’ve been on this job since at least fall 2018. That’s when?NEOtrans first became aware?that SHW and KJK were working through a variety of documents, ultimately including requests for proposals, task orders, property agreements, filings and other legal instruments relating to the HQ+R&D project.

That’s a lot of billable hours by a firm that doesn’t come cheap.

Assisting SHW through the HQ+R&D process is Welty Building Co. Its President and CEO Don Taylor is reportedly close friends with SHW CEO John Morikis. Welty has had a bad run of late, running into some financial difficulties, two sources say. Some healthy fees paid by SHW are probably helping out Welty.

After the issuance of a request for qualifications and an evaluation process, SHW and Welty hired Gilbane Building Co. in early October as the HQ+R&D construction management firm. It also pared the list of prospective HQ+R&D sites. But SHW is reportedly still listening to offers until it closes on the Jacobs/Weston lots.

Then we have the broker’s fees. CBRE, the nation’s largest real estate brokerage, is doing more than just circulating draft purchase agreements. It reached out to a half-dozen or so property owners downtown to solicit proposals for a combined HQ+R&D facility and to the DiGeronimo family regarding its Valor Acres site in Brecksville for the R&D center only, sources said.

And CBRE reportedly did that even as it, on behalf of SHW, reached a purchase agreement with the Jacobs and Weston groups last March or April. The Jacobs/Weston lots have been SHW’s favored site all along. That’s no surprise considering that in 2014-15, when Morikis was SHW’s chief operating officer, it hired civil engineering giant AECOM to plan for a new HQ on the Jacobs lot.

Even though SHW favored the Jacobs/Weston lots, it wanted to generate alternatives to see if anything else was worth considering locally while giving lip service to sites outside of Greater Cleveland. The goal was to give its board of directors some meaningful data for sticking with the Jacobs/Weston lots.

“Sherwin-Williams would have had to put up earnest money for the land,” the due diligence expert said. “Earnest money is usually anywhere from 3-5 percent of the agreed upon purchase price. And that usually doesn’t come back to the purchasing prospect if the transfer doesn’t go through. So SHW could be out $1.2 million to $2.5 million if they don’t buy the Jacobs and Weston lots.”

Then there’s the architect’s fees.

“The architect fees are a fortune, probably in excess of $1 million at this point,” the due-diligence expert said.

That’s for an HQ+R&D to?accommodate up to 6,000 workers, including 2,500 jobs that would be new to downtown Cleveland.

Vocon is a very capable firm. But when the conceptual designs are being developed and advance into schematic designs, it is possible that a “starchitect” could be brought in.

For example, when Welty, Vocon and Gilbane last joined forces on building a Northeast Ohio headquarters facility — for the Goodyear Tire and Rubber Co. in Akron — they ended up bringing in San Francisco-based Gensler to put on the finishing touches. It’s possible they already have or are considering it — after all, why would people from Gensler’s Chicago office start following me on Twitter?

By the way “hello” — hope you’re enjoying the blog!

And now we come to the visible work that’s been?underway for the past month?using geotechnical core drilling rigs, groundwater well drilling rigs, vacuum excavators and even some possibly related sewer work.

In the first two weeks of November, the geotechnical drilling rigs and vacuum excavators belonging to Enviroprobe Integrated Solutions Inc. and Environmental Works Inc. descended upon the Weston lots.

Into the third week of November, groundwater testing/removal wells were dug into the Jacobs lot by sub-surface construction firm DRS Enterprises with water samples removed and tested by Strategic Environmental Services, Inc. which conducts environmental remediation and waste disposal.

It’s possible that the groundwater tests found sanitary sewer flow infiltration. And it’s also possible that SHW paid for the follow-on sewer repairs, perhaps to be reimbursed by the city.

Why? Because the very next week and continuing into December, the same well-drilling contractor DRS Enterprises was busily making sewer repairs in the city’s street rights of way, including pipe re-lining and excavations to make spot repairs on West 3rd Street and westward along Superior Avenue. They even worked the day before and the day after Thanksgiving when many people are on vacation.

I wrote a?Nov. 30 article?where I doubted that SHW had initiated the sewer work. Now I’m thinking they did. I wasn’t aware on Nov. 30 that DRS had also done the Jacobs lot well-drilling a week earlier.

It wasn’t for a lack of asking. The sewer workers themselves dismissed any questions. The Northeast Ohio Regional Sewer District said it wasn’t the one making the repairs and besides, these were sanitary sewer collectors which are the responsibility of the city.

I’ve reached out to several city officials, including asking them to speak off the record, to better understand what is happening here with these repairs. But none of them, not even the usually chatty ones, were talking.

It’s highly unlikely that the city could authorize a private contractor to make repairs so quickly except in emergencies. It probably wasn’t the city and it probably wasn’t an emergency. The reason is because it all started with DRS drilling groundwater test wells from a private property (Jacobs lot) which, if the city led this effort, it would have required getting the law department involved to secure access.

The city wouldn’t have bothered with that time-consuming process in an emergency. The city would have drilled into an adjacent public right of way, especially a lightly used one like Frankfort or even the northwest quadrant or roadway of Public Square.

And why would the city drill in the first place? Sanitary sewer leaks weren’t stinking up Public Square or spilling out onto the street. The drilling started because SHW wanted to check subsurface conditions below the Jacobs lot for which it has a purchase agreement.

If it was SHW that paid for the sewer repairs, as I now suspect, then they are dead serious about locating on this site. You don’t spend that kind of money and effort to address a possible infiltration from the aging sanitary sewers nearby if you’re still debating this site. And considering how fast they got a crew out there and even worked the Friday after Thanksgiving, it appears SHW is in a big hurry to get this done.

The sewer repairs were obviously not cheap, regardless of who paid for them.

By the way, speaking of lightly used public rights of way, another example of SHW’s HQ+R&D due-diligence work was revealed publicly on Nov. 21. 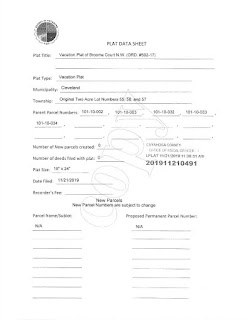 On that date, title work by First American Commercial Due Diligence Services — the same company filing the certificates of disclosure for SHW — discovered a vacated street right of way that was supposed to have been removed from Cuyahoga County’s plat maps two years ago.

Cleveland City Council voted in 2017, at the request of Weston which was then pursuing a since-abandoned development, to vacate an alley called Broome Court N.W. The county never removed the alley from the plat maps by distributing the right of way among adjacent parcels. The vacation plat of Broome Court was filed with the county recorder’s office Nov. 21 and the plat map was redrawn Dec. 2.

This is an example of the title work that’s necessary in order to discover and fix anomalies for the 46 parcels in the Jacobs/Weston lots. That work may eventually involve a possible further redrawing of plat maps to consolidate parcels following their acquisition by SHW. All of this title work is another significant expense for the global coatings giant, the due-diligence expert noted.

Finally, he added that the normal time for such due diligence work involving a large project is about six months plus multiple two- to three-month extensions as needed following the execution of purchase agreements. So it’s not surprising that the due diligence for a project of this scale could take six months to a year, he said.

SHW’s purchase agreements reportedly were executed in March or April. This project is bigger than any that the expert has ever experienced. It’s understandable that the due-diligence work is not yet done nearly eight months later.

But that work may be coming down the home stretch to the finish line, concluding with a public announcement by SHW about an estimated $1 billion HQ+R&D campus and up to 6,000 retained and new jobs for downtown Cleveland.

At first, a contributed rendering posted here at NEOtrans looked like it contained an oversight. But with more information coming in like drops of… 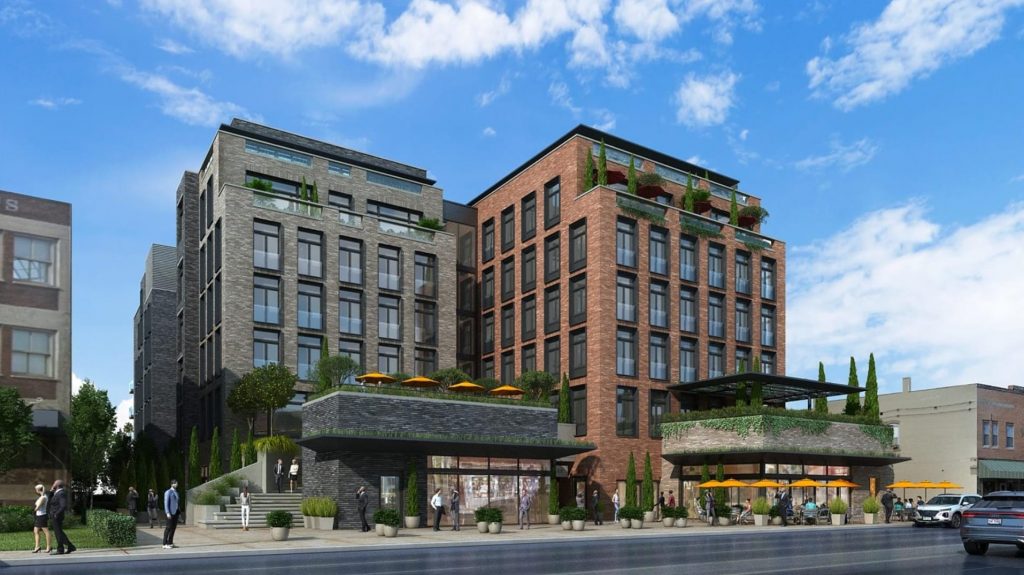 A proposed major mixed-use development in the Gordon Square area is due to go before City Planning Commission as early as this month. The… 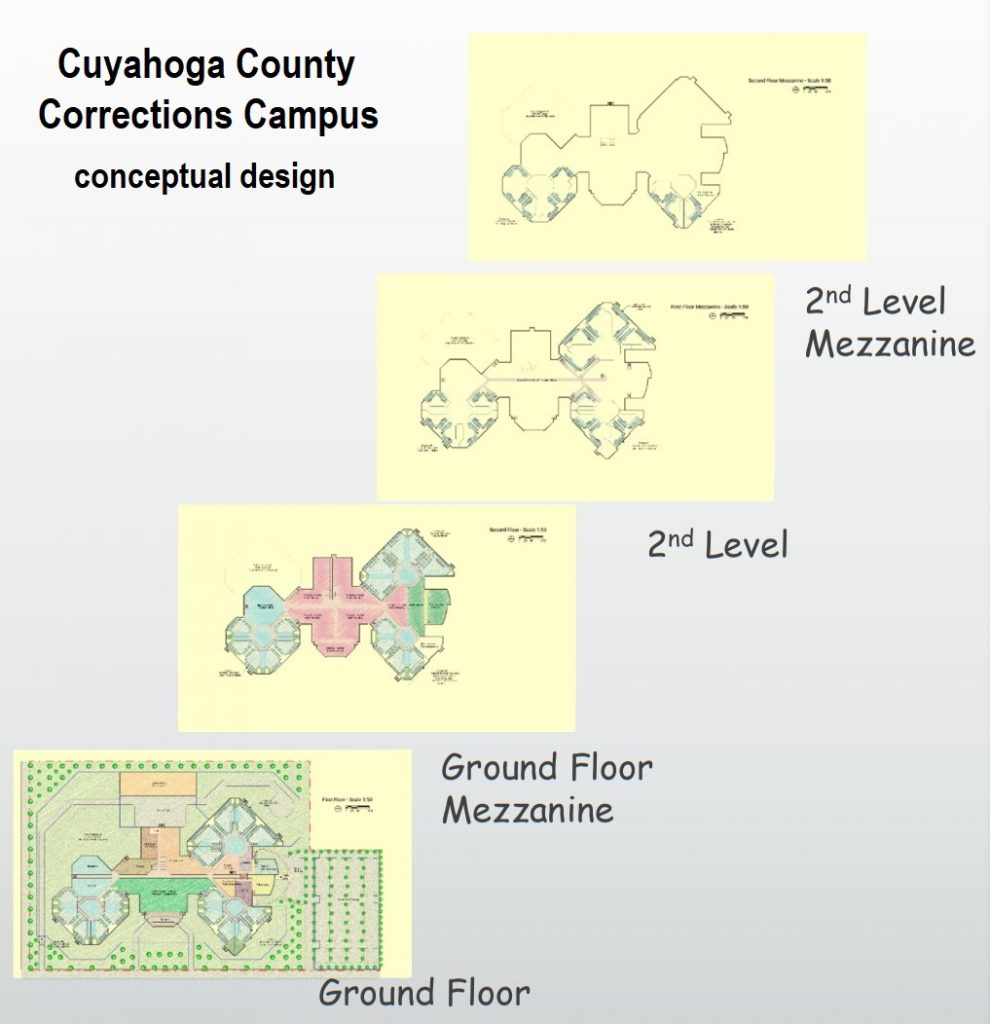