More signs are pointing to Sherwin-Williams (SHW) getting close to announcing the sites for its new headquarters plus research and development facilities (HQ+R&D). At stake are up to 6,000 jobs in direct employment and many thousands more in spin-off/support jobs.

Two sources say the sites could be announced this week. Other sources, some of them high-level, have gone into shut-down mode in the past week, either refusing to say anything because SHW is clamping down on leaks to this blog or because their flow of information has stopped.

“We expect capital expenditures to be approximately $320 million, which is about 1.7 percent of anticipated sales. Note that this estimate does not include any expenditure related to our previously announced headquarters and R&D center project. We expect to provide you with an update on this project in the near future,” he said.

Morikis participated in that conference call after waking up that morning in his $10 million mansion that he and his wife built just one year ago in the Cleveland suburb of Bay Village after moving from their Brecksville home of 19 years.

His brand-new 22,000-square-foot mansion isn’t the only sign that SHW’s new HQ+R&D facilities aren’t going anywhere but up in Greater Cleveland.

To put a finer point on it, there are multiple signs — and documents and records — that SHW will build its HQ on the 6.82 acres of parking lots owned by the Jacobs Group and the Weston Group, on the west side of Public Square.

And before sources were shut down in recent days, three of them said that SHW’s favored location for its new, consolidated R&D facilities was on the Riverview phase of CityBlock. The Riverview phase is Bedrock Cleveland’s redevelopment and expansion of Tower City Center along and below Huron Road to the banks of the Cuyahoga River.

Developing this site would realize a century-old vision of the Van Sweringen brothers who built the Terminal Tower complex. That includes the Landmark Building, SHW’s HQ of the last 90 years. SHW is well aware of that history and vision, including failed efforts by Forest City Enterprises in the 1980s, 90s and 00s to complete the Van Sweringens’ dreams.

Bedrock’s vision for this land is to connect two of downtown’s prime public spaces — Public Square and the river — at the location where they are closest to each other. And it could connect Bedrock’s riverfront development site anchored by SHW’s 1,000-employee, 350,000-square-foot R&D facility anchoring it, to SHW’s chosen site for its new 5,000-employee, 1.45-million-square-foot HQ.

For nearly a year before SHW made its search public on Sept. 12, 2019, this blog has followed the search progress of the global coatings giant. In that time, I’ve written about many insights and facts which point to SHW building its HQ on the Jacobs/Weston lots.

But I’ve never put all of the facts in one blog before. So, on this eve of SHW’s big announcement, here they are in chronological order….

Let’s put aside for a moment that I’ve heard from multiple sources who were in the rooms when decisions were made or instructions were issued to proceed with researching and acquiring the Jacobs and Weston lots.

Understand that no other company as big as SHW is looking for so much new office space in Greater Cleveland. Not even close. No one else is looking for so much space that it would fill a nearly 7-acre footprint in Greater Cleveland’s central business district with multiple vertical structures, including one or two towers. Northeast Ohio’s real estate community is like a small town. There are very few big secrets here.

Perhaps by the end of this year city and county officials may decide to pursue building a new courthouse tower downtown. But that’s not a given. Any decision is still months away.

When asked about all of this activity, SHW’s spokesman wouldn’t even issue an on-the-record denial because he didn’t want anything publicly reported. That didn’t prevent me from writing about the resumption of SHW’s HQ project post-Valspar deal.

In early spring 2019, sources said SHW reached a purchase agreement with the Weston Group and, presumably with the Jacobs Group for the sale of their properties. While SHW began its due diligence on all aspects of the property, SHW reached out to other downtown property owners to consider alternatives. In the fall of 2019. SHW chose the Jacobs/Weston lots for its HQ.

Throughout my coverage of these developments in the spring and summer of 2019, neither SHW nor any of their contractors that I had publicly named ever asked me to issue a correction, clarification or tell me to remove their company’s name from my articles. Instead, and on two occasions, SHW?sent intra-company e-mails to its executives and managers urging them to not talk with the media.

SHW finally and publicly announced its HQ+R&D search on Sept. 12. But the search was actually wrapping up by that point.

Then, on Oct. 8, sources said Welty hired Gilbane Building Co. in a joint venture to provide construction management services for SHW’s HQ. I was informed about it before many Gilbane employees were, including those asked to comment on it. One of them responded “Are you sure about this?”

The joint venture was incorporated as?Welty/Gilbane JV, LLC?on Oct. 24, according to?public records from the Ohio Secretary of State‘s office. October is when SHW’s HQ project began showing up in public records.

On Oct. 21, as part of the due diligence set forth months earlier, the Weston Group cleared a parking lease dating from 2016 off its 5.65-acre Superblock bounded by Superior and St. Clair avenues plus West 3rd and West 6th streets (see images, above). Weston moved the lease it had with its own Warehouse District properties, under title to separate affiliates, to a parking lot Weston owns at the northwest corner of West 3rd and St. Clair.

That lease amendment was recorded with Cuyahoga County on Oct. 23. The amendment reduced the number of guaranteed residential parking spaces for Weston’s Standard Building from 370 to 281. But most importantly, it removed all 23 parcels in Weston’s Superblock from the lease, clearing the way for the eventual sale of those parcels.

No similar clearances were necessary for the Jacobs lot as the Jacobs Group, through its affiliate Public Square West Limited Partnership, was shown in multiple county records as recently as 2016 to have fee simple title to the property. That means the property is legally clean and free of any encumbrances to its sale.

Then came evidence of potential development. Beginning on Nov. 2 and continuing for the rest of the month, drilling rigs from geotechnical survey firms descended first on the Weston lots and then on the Jacobs lot to take soil and groundwater samples from below them.

Trucks belonging to DRS then proceeded to cut up streets in and around the Jacobs and Weston lots and conduct repairs to city-owned sanitary and storm sewer collectors in late-November and into December (see images above).

Northeast Ohio Regional Sewer District officials confirmed it was city-owned sewers being repaired. The Cleveland Department of Public Utilities referred inquiries to the mayor’s office which didn’t return the calls to provide any detail about the repairs.

Then came the best evidence yet. On Nov. 11, a trusted source contacted me to say that SHW would be filing city permits later in the week for buying properties west of Public Square. Sure enough, at the end of that week, a title company named First American Title Insurance’s subsidiary, Commercial Due Diligence Services,?filed 12 certificates of disclosure regarding the purchase of the Weston lots (see image above).

Those certificates are sometimes filed by prospective commercial property buyers. On the other hand, for residential purchases, certificates of disclosure must be filed to get violation/condemnation and legal use information from the city. But they aren’t required for commercial developments. It’s possible that First American Title, based in Oklahoma, wasn’t aware of that.

Interestingly, no similar certificates were filed for the Jacobs lot, possibly because SHW had already done this research in 2014-15 when it pursued a new HQ on the Jacobs lots, only to be shelved during the Valspar acquisition. But public records of the certificates of disclosure could be located only for the Weston lots, not the Jacobs lot. 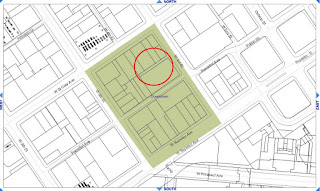 First American found some anomalies with the Weston lots that had to be cleaned up, including the vacating of an unused alley, Broome Ct. N.W., from the county’s plats maps. Cleveland City Council authorized the vacation by ordinance in 2017 but it was yet to be removed by the county. The plat map was updated by the county on Dec. 2, public records show.

By the way, First American has a prior connection to SHW. It was the title company associated with a mortgage that 4780 Hinckley Cleveland LLC, an affiliate of IRG Dayton I LLC, was released from on Dec. 10, Cuyahoga County records show. IRG owns a property at 4780 Hinckley Industrial Parkway leased by SHW since 2016 as an overflow office space.

Since then, most of SHW’s HQ+R&D efforts have focused on programming for the HQ site, nailing down the R&D site, and finalizing public incentives for each. Complications involving the R&D site have delayed the public announcement.

At the end of this journey, I appreciate hearing from many of the 40,000 readers of this blog. I’ve met many of you who are SHW employees or their families who are eager to know where you will be working and living three years from now when construction on the HQ+R&D facilities is complete. I hope that I’ve helped you. You deserved to know what was going on behind the scenes. 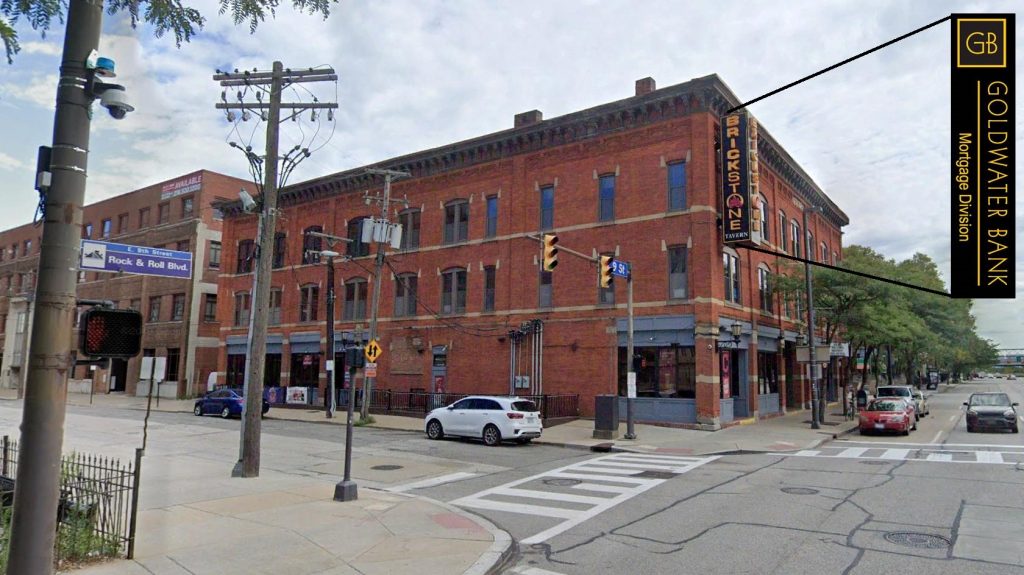 For the second time this month, there is news that a company is relocating office jobs from the suburbs to downtown Cleveland. Earlier this… 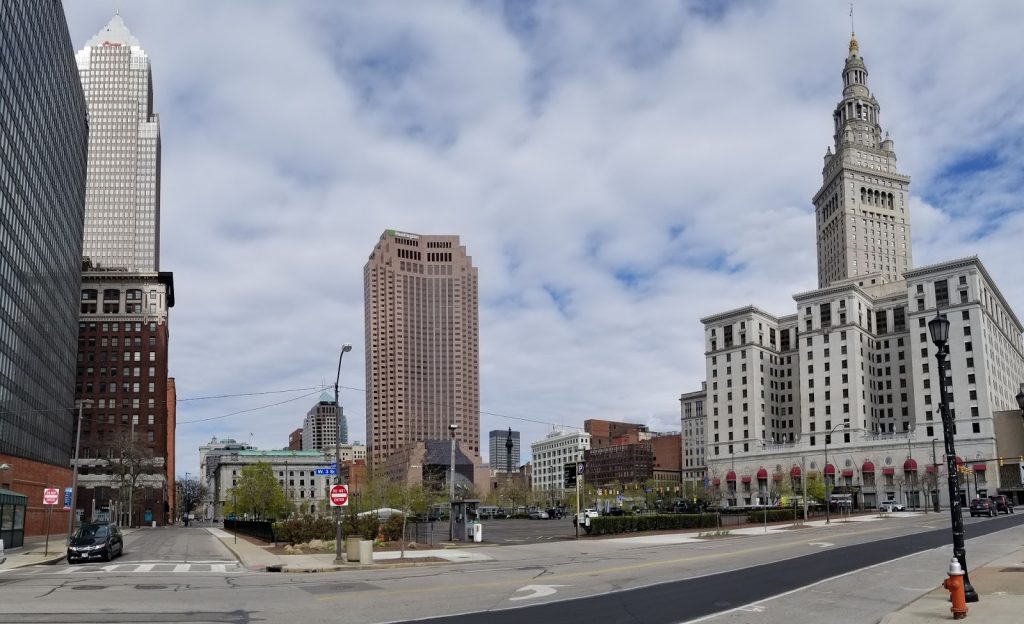 Sherwin-Williams' (SHW) proposed headquarters tower on Cleveland's Public Square may be a little taller than previously reported. In fact, it could end up being… 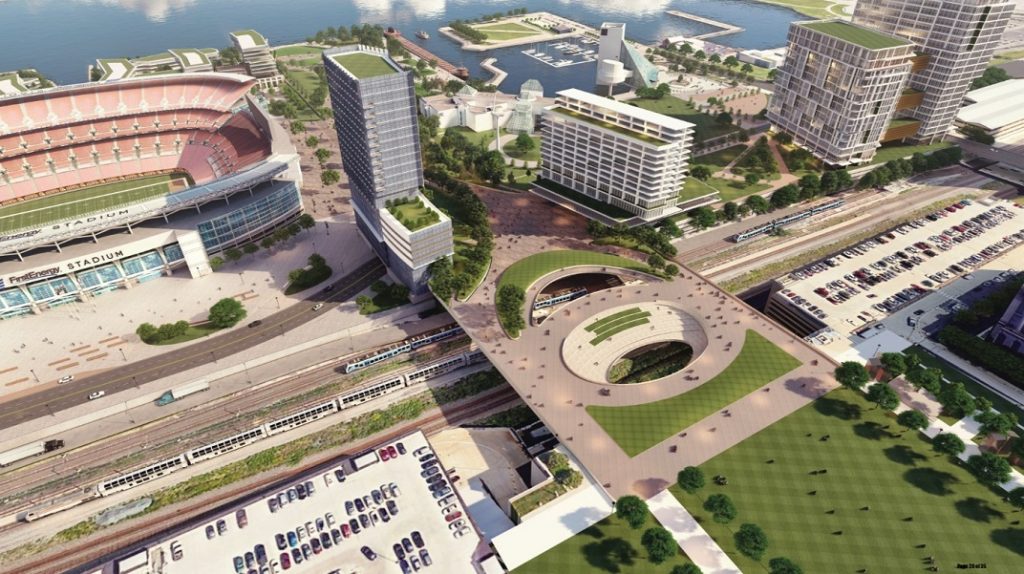 The director of the Northeast Ohio Areawide Coordinating Agency (NOACA), a metropolitan planning organization, today said she intends to submit to the Federal Railroad…

4 thoughts on “Sherwin-Williams’ HQ search is over (& probably its R&D search, too)”