Despite the economic slowdown, several prominent local and national developers and investors are making big real estate plays on the Flats’ West Bank, across the Cuyahoga River from downtown Cleveland. The end result could be a mix of buildings with mostly residential offerings and at least two of the developments possibly rising to 20 stories or higher.

As one real estate insider said, “That area might be the next hotspot after Hingetown.” He’s referring to the northeast corner of Ohio City, adjoining Flats’ West Bank, where just about every block since 2000 has had a development project built, underway or planned. It’s about time, as the Flats’ West Bank sat out Cleveland’s redevelopment boom of the 2010s.

That insider, plus a few others who also spoke off the record because they were not authorized to speak publicly, revealed four potential projects emerging on the West Bank. All four of the projects could be impressive in their scale and only one remains a closely guarded secret. Details are emerging about the other two projects. And the fourth is fairly well known, but still early in its project development process.

One instigator of the Flats’ West Bank developments is the recent and ongoing infrastructure investments, namely several all-purpose trails. They include the Lakefront Bikeway Connector to Battery Park and Edgewater Park, the Centennial Lake Link Trail along and west of Center Street, and an extension of the Towpath Trail onto Columbus Road peninsula.

Plus, construction is well underway on the Wendy Park Bridge over the busy Norfolk Southern railroad tracks to connect the Flats West Bank to the lakefront. In the other direction is the site of the future, massive Irishtown Bend Park where hillside stabilization efforts are progressing.

The 23-story apartment building is proposed to rise at 2208 Superior Viaduct, on a 0.3-acre parcel that’s listed for sale at $1.5 million. The listing shows a sale is pending. According to two sources, that buyer is Wayne Jatsek. If that name doesn’t ring a bell with you, you’re not alone.

He and several of his family members are involved in everything from home renovations to heavy highway construction locally. Currently, he is serving as the frontman for a 24-unit luxury townhouse development in Westlake?called Hillsborough Point on Center Ridge Road.

Jatsek, the two sources said, is also a frontman in this case, too. He is the lead investor for a group of people with much deeper pockets, and at least one of them is reportedly from out of town. A phone message left for Jatsek at his Walton Hills residence was not returned prior to publication.

In fact, the investor group’s pockets are apparently deep enough that the only thing keeping them from building higher than 23 stories is the height district in the city’s zoning code. On this site, structures as tall as 250 feet can be built unless a variance is requested from the city’s Board of Zoning Appeals (BZA).

Cleveland’s BZA hasn’t met since March due to the pandemic and isn’t scheduled to meet again, albeit virtually, until late June.

However, sources said plans for the apartment tower were developed by Dimit Architects and submitted to the City Planning Commission for review. The project could appear on the city’s Design-Review Committee docket as early as June. Design-Review began meeting virtually this month.

Plans include demolishing the existing 120-year-old, 16,462-square-foot light-industrial building on the property and digging subterranean parking for the tower above.

The property abuts the west end of 142-year-old Superior Viaduct. The bridge, originally built with 10 sandstone arches, was the main route for pedestrians, horse carriages and streetcars linking downtown to the west side of the city until 1920. It was replaced two years earlier by the Detroit-Superior Bridge. Three of the old viaduct’s arches were later removed so the river could be widened.

At the east end of the remaining viaduct is the site of another remarkable, proposed development — 1250 Riverbed St. Here, two historic buildings are proposed to be retained, renovated and vertically expanded to create a 20-story apartment and possibly hotel structure.

Up to 16 stories are proposed to be added to a four-story, 103-year-old building and an attached six-story, 108-year-old building. Together, the two buildings total 50,000 square feet. They were converted from commercial uses to 28 residential units in the 1980s and renamed the Left Bank Apartments.

An adult lifestyle nightspot called Club Eros moved out of the ground floor of the six-story building more than a month ago. Only a couple of apartments remain occupied between the two buildings, a source said.

Washington DC-based Coloma River Capital has a purchase agreement to acquire the building but the deal hasn’t closed yet. The seller is 1250 Riverbed Street LLC whose managing members are two Rochester, NY men, Eliahu Adahan and Peter R. Hungerford, according to Cuyahoga County records. Contact information for Hungerford couldn’t be located. Abahan didn’t reply to an e-mail before publication.

The requested sale price wasn’t publicized but, according to another source, 1250 Riverbed Street LLC wanted $3 million for the valuable riverfront property. The seller reportedly accepted about $2.6 million, the source said. The for-sale listing for 1250 Riverbed was removed last month.

E-mails sent to Coloma River Capital’s Managing Partner Charles Paret, to a general e-mail address for the company, and to a public contact form on the firm’s Web site weren’t returned prior to publication.

However, NEOtrans was able to secure two marketing pieces from Coloma River Capital about the project. One is a January 2019 marketing brochure. Last year, the project originally was limited to adding only two stories of small-floorplate restaurant/event space to the top of the building and converting the property to a 102-room Dream Hotel.

“Coloma River Capital has assembled a ‘best in class’ team to reposition and re-brand the property into an upscale luxury boutique hotel to open by June of 2020,” the brochure noted. “Immediately upon closing of the property, the team will begin planning for a renovation of all rooms, public spaces, adding a spa, and various creative spaces.”

Since then, Coloma River Capital reportedly repositioned the project to one with a larger scale. The smaller-scale project and an already softening hotel market wouldn’t generate enough revenue to offset the high purchase price. So a 16-story addition was proposed and more investors were secured. Their identities remain unknown at this time.

Omaha-based DLR Group was hired for design and engineering services to renovate and expand the historic, timber-framed buildings into a 20-story structure comprised of 85 apartments and 200-key hotel, according to a draft presentation from earlier this year. It is possible that the hotel may be scaled back or removed altogether given the deepening weakness in the lodging market.

DLR Group proposed a unique approach to support the 16-story addition over the historic building — a building that could scarcely support the previously proposed two-story addition. Suggested are two thick concrete, vertical cores through the interior of the two historic buildings from which Vierendeel trusses (rigidly-jointed frames) would support each floor. In effect, the addition would be suspended above the existing buildings.

“On the front of the building you’re looking right at the water where you can go kayaking, canoeing, paddle boarding,” said Coby Socher, Keller Williams broker who represented Coloma River Capital, in a Vimeo video about the project. “There’s just all these cool things you could be doing right outside your door. Whether it’s in the middle of the day on Tuesday or nightlife on a Saturday night there’s always something happening.”

Heading back west on Superior Viaduct to where it intersects with West 25th Street is the former Cuyahoga County Engineer’s property. Not only did NEOtrans break the story in late-2018 that the county was disposing of the property, NEOtrans also broke the story in June 2019 that developer Mike Panzica and his team won the bid to acquire it.
At the time, Panzica was perhaps known best as a principal of Hemingway Development. He is wrapping up work there while starting up his own company M. Panzica Development and working in a partnership with Hingetown investor Graham Veysey called Bridgeworks LLC. Bridgeworks is acquiring the 2-acre county property for $4.15 million.
Originally, Bridgeworks was proposed to be a one- or two-building development offering about 200 apartments and ground-floor retail. Given the size of the property, the development probably would not exceed 10 stories in height and might even be a few stories shorter. But the pandemic and resultant economic slowdown has forced the partners to adjust their plans.
“We’re still moving forward but slowly,” Panzica said in an interview earlier this week. “We’ve shifted some of the programming to reflect the changed environment we’re now in. Graham (Veysey) and I will be in a position to reveal more in a couple of months.”
The biggest parcel of land in play right now on the Flats’ West Bank is cloaked in the most secrecy. Two sources say a buyer has emerged for some or all of Jeff Jacobs’ Nautica Entertainment LLC-owned 5.6 acres of land. But the real estate broker who has the listing — Terry Coyne of Newmark Knight Frank — isn’t talking. And that’s newsworthy right there.

“He is not talking which is akin to a unicorn sighting,” joked one of the two sources.

Coyne either likes to chat about properties he’s promoting or enjoys waxing lyrical about big sales he’s achieved. So if he’s not talking, it may be because there’s something afoot but not yet signed, sealed and delivered.

Coyne didn’t respond to a personal message on Twitter seeking more information about a possible buyer and development on the listed properties.

The list price for the Nautica riverfront parcels is a steep $17.5 million. Even if the site is sold in pieces near the divisible asking price, it will still likely require a significant development to generate enough revenue to achieve a decent return on the investment. That’s a tall order at any time in low-rent Cleveland, least of all during a national emergency.

But it is a waterfront property and it’s in a height district where buildings up to 250 feet tall can be built. Lastly, it’s increasingly surrounded by significant real estate plays and public infrastructure investments that are making the Flats’ West Bank more attractive after a decade that developmentally passed it by. 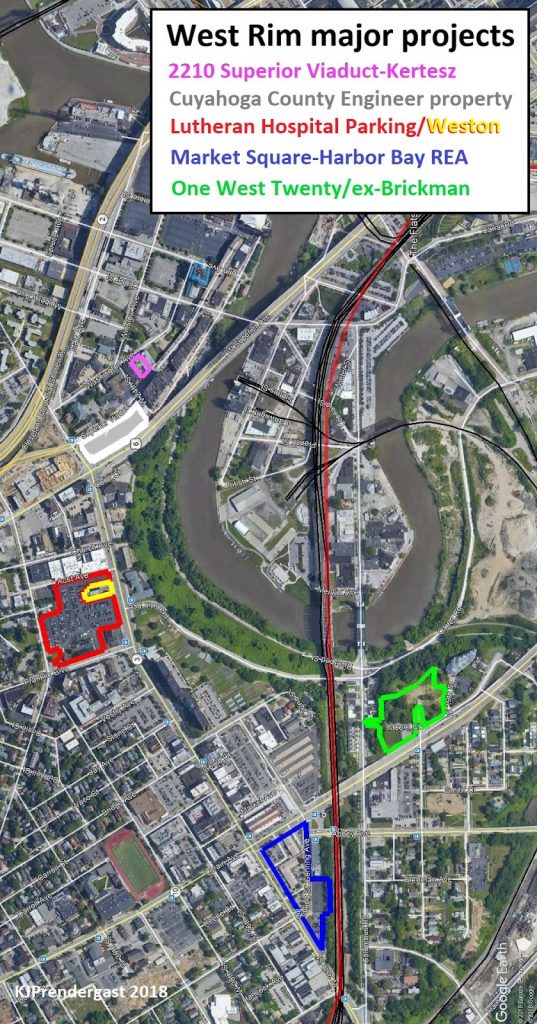 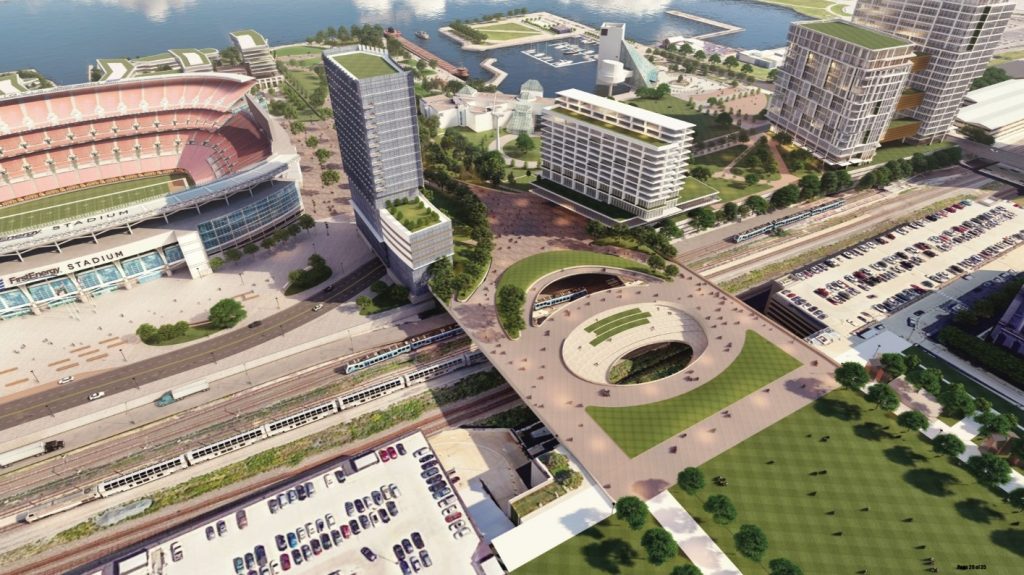