The pace of investment in America’s cities has been one of the remarkable stories since the end of the Great Recession. There are few places where that investment is more evident than in Greater Cleveland which in 2014 ranked ninth in the nation in total new construction jobs (not percentage of change).

Much of that is for renovating historic buildings, rebuilding infrastructure and some modest new buildings. Anyone who has spent time downtown or in neighborhoods like Asiatown, Gordon Square, Little Italy, Ohio City, Tremont or University Circle in recent years has seen orange barrels, scaffolding and construction crews everywhere.

With the rebuilding of Cleveland’s foundation substantially underway and the region’s economy pivoted away from manufacturing (only 11 percent of the metro area’s employment), most renovation-related work is about to transition to new construction. Big time.

Don’t get me wrong. There’s still lots of old buildings and infrastructure to rebuild or replace. While many of Cleveland’s neighborhoods have seen amazing transitions and rising populations, others remain out of control from a safety and economic perspective. But bringing residents with purchasing power to support more jobs in a core city that’s accessible to all is a worthy goal. A job is the best social program there is. More residents mean more shopping, restaurants and amenities which also make downtown more attractive to companies seeking settings to establish offices and to access talent.

So while there are still more old office buildings and department stores to convert into residential and other supportive uses (see the huge 925 Euclid or the May Company buildings), the market for more residential continues to grow as more residential products are added. Downtown buildings, in total, have 1,800 people on waiting lists. And yes, there’s a few office buildings that will soon be in the mix too. All of these will change the skyline of downtown Cleveland in ways not seen in decades.

Here are the recently built, planned or proposed buildings of 20 stories or more in downtown Cleveland, ranked in order of probability:

Hilton Convention Center Hotel (to be completed 2016): 32 stories or 380 feet tall, with 600 hotel rooms and Level 32 Skybar restaurant open to the public, on Lakeside at Ontario, costing $272 million and developed by Cuyahoga County.

nuCLEus (demolitions due late-summer 2016): 54-story tower mixing apartments, offices (Benesch is anchor office tenant) and hotel over pad of retail and parking between E. 4th, Prospect and Huron to be developed by Stark Enterprises and J-Dek Investments for about $380 million.

Playhouse Square tower (groundbreaking TBA): 30-story tower featuring mostly apartments but may include dine-in movie/TV theater or other non-residential use on the ground floor to be developed by the Playhouse Square Foundation on SW corner of Euclid and E. 17th.

Justice Center replacement?(groundbreaking TBA): 55-65 stories if all 2.3 million sq. ft. of current uses not including structured parking were stacked in the same structure with huge floorplates of about 40,000 sq. ft. each. Or the new center could be put in two new towers of 25-35 stories each, including parking. The current jail is spread among 20 floors; the courts tower is 25 stories; the police department is 9 stories. None has public parking. A space needs analysis is underway.

The 37-story proposed skyscraper listed last could find an anchor tenant soon and be bumped higher up the list. Medical Mutual may consolidate its 1,700 Northeast Ohio employees into roughly 600,000+/- sq. ft. of space. That could be located in downtown Cleveland, based on their actions recently in consolidating its Central Ohio offices into a single building in downtown Columbus. Perhaps Medical Mutual might move to Weston/Citymark’s development.

Perhaps Jacobs Group may build the insurance company a new, high-profile tower on its now-dismal Public Square parking lot. There are also rumors that Sherwin-Williams is in the market for a big new tower. The 150-year-old paint company has outgrown its headquarters space in the Landmark Offices at Tower City Center.

More new buildings albeit shorter than 20 stories are under construction or about to get underway in downtown Cleveland. This includes the 11-story, 237-unit Edge CSU Student Housing underway at Euclid and E. 18th and an 11-story, 100-unit apartment building will likely see a groundbreaking this year at Flats East Bank. Plus numerous buildings in the 5- to 20-story range are under construction or will start this year in Cleveland’s Ohio City, Gordon Square, Tremont, University Circle and other city neighborhoods.

If you’re having a hard time keeping track of it all, check back weekly at UrbanOhio’s Northeast Ohio “Projects & Construction” section. There’s always something new going on citywide and even a few developments in the suburbs. The pace of construction will kick into high gear after July once the Republican National Convention clears out of town. But most of the above projects will get their final designs reviewed by the city in the meantime and the graphics will be posted at UrbanOhio. 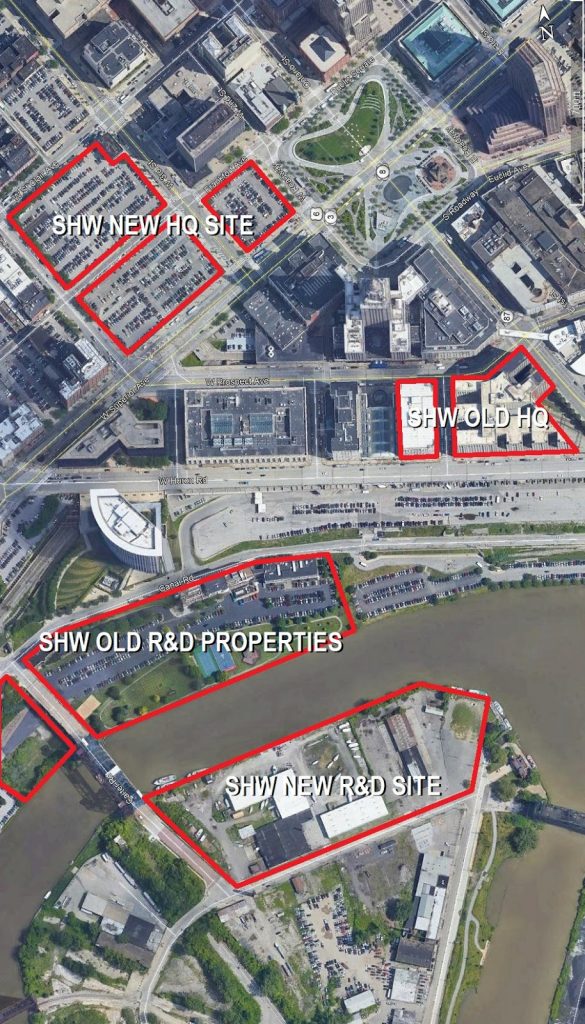 According to multiple sources, Sherwin-Williams (SHW) has made its decision on where to build its billion-dollar new headquarters buildings and new research & development… 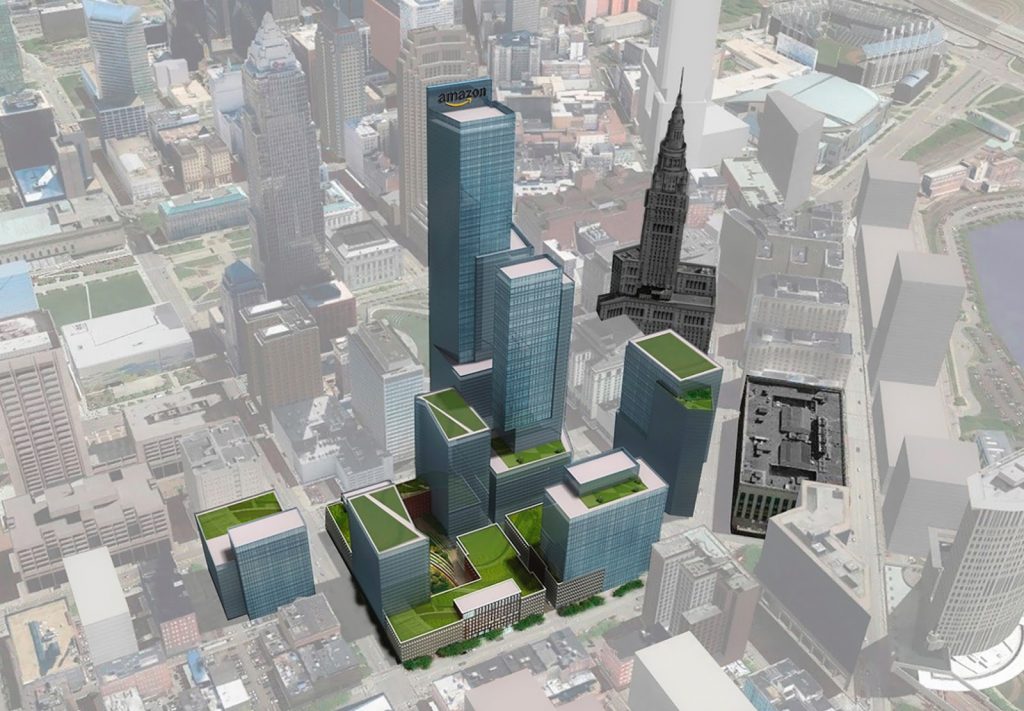 If you try to go whaling in the ocean of rumors for Sherwin Williams' (SHW) headquarters and research/development facilities, bring two things with you:… 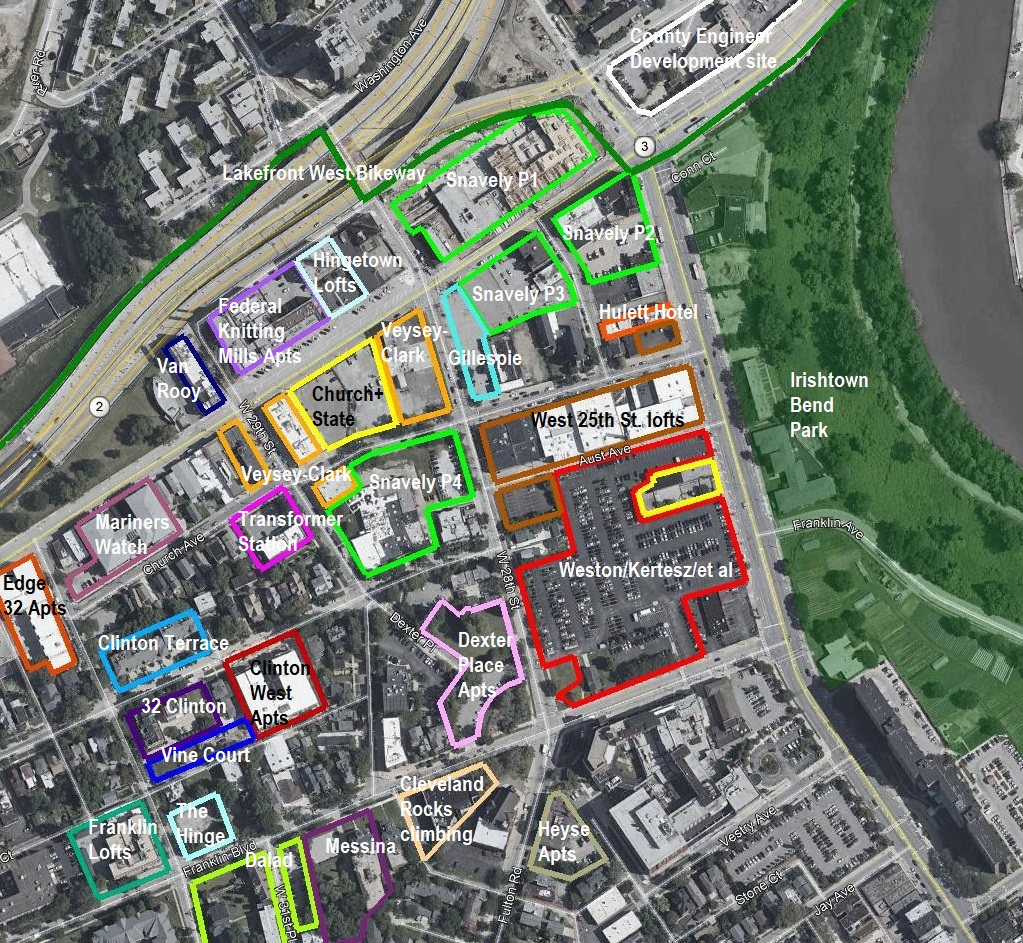 Hingetown, that little enclave within a neighborhood within a city seemingly couldn't be growing any faster than already it is. No matter where you…

2 thoughts on “Cleveland ready to scrape the skies more”