CLEVELAND To anyone who follows real estate development news closely, you are allowed to be surprised by the scale and intensity of development occurring in the cores of our largest cities. And one of the biggest turnarounds anywhere in the USA is occurring in Cleveland.

What’s even more amazing is that we’re just starting a potentially major shift in housing and lifestyle choices to one that is decidedly more urban. True, Cleveland is jumping into it in a big way as you probably have noticed and which I will soon describe. But Cleveland has only scratched the surface on tapping a market that is in transition.

That may be hard for some to grasp as a dozen downtown buildings taller than 10 stories are already getting renovated into apartments, hotels and/or commercial space. And half of those buildings are taller than 20 stories. A few are mostly vacant, obsolete office buildings but others are at least half-occupied with offices. Nearly 700,000 square feet of offices will be on the move in the coming years, hopefully staying downtown in other existing buildings or possibly in a new building or two. 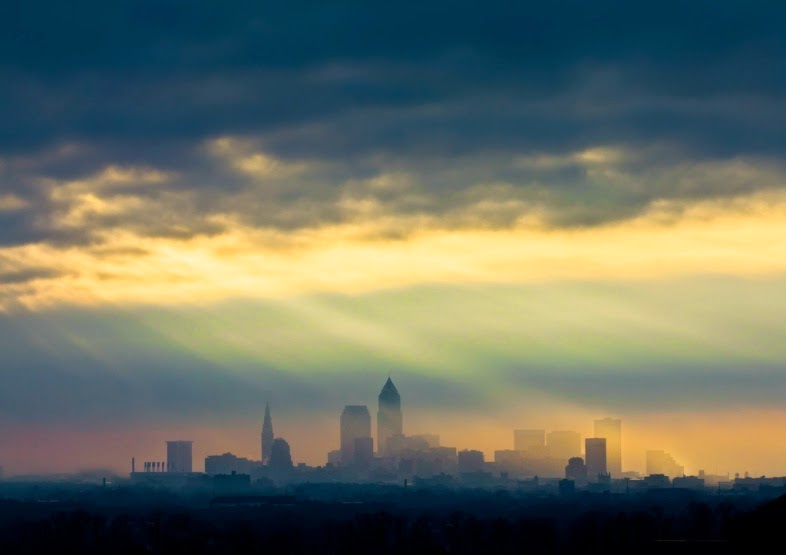 This flurry doesn’t include new construction such as the 31-story Hilton Hotel, or the next phases of Flats East Bank, or a mixed-use neighborhood on the lakefront, or Brickhaus’ Ohio City Townhomes, or Cedar Extension’s redevelopment, or major improvements to FirstEnergy Stadium and Progressive Field, or the remaking of Public Square, or a new walkway linking downtown to the lakefront.

All of that construction and more has pushed Cleveland into the tops of national rankings of new construction jobs added in the past year. The Associated General Contractors (AGC) of America reported this summer that, out of 339 metro areas nationwide, only eight added more construction jobs than the 5,300 added in Greater Cleveland between June 2013 and June 2014. Some general contractors in Greater Cleveland reported that they have increased wages and upgraded benefit plans to attract and retain skilled construction workers, ACG reported in its Sept. 8, 2014 Data Digest.

The question many are asking: how long can this last?

First, consider the snowball effect. It rolls down a slope, gathers momentum and gets larger in the process. The same thing appears to be happening in Cleveland’s center city, into which I will include Downtown, Ohio City, Tremont, Central and Asiatown. I debated whether to include University Circle, but chose not to since it is Ohio’s fourth-largest employment center and therefore is big enough to stand on its own as an economic driver.

So each new or renovated residential building adds more purchasing power to the center city. That brings more restaurants, shops and amenities that attract new residents. New primary education schools are also popping up in the urban core. Here’s an example of how the center-city market is flexing its muscles and absorbing more and more residents:

Marcus & Millichap’s fourth-quarter 2013 Apartment Research Report showed that, among all the submarkets within Greater Cleveland (Cuyahoga, Lake and Lorain counties), Central Cleveland had the lowest vacancy rate at 2.5 percent AND commanded the highest average rent of $1,058. Lake County had the next-lowest vacancy rate of 3 percent while Beachwood/Mayfield had the next-highest rent of $926.

As more and more residential buildings opened in 2014, a funny thing happened ? vacancy rates went down to 1.7 percent according to the Downtown Cleveland Alliance (DCA) in its August 2014 market report. And, most recently, the most luxurious building with the highest rents opened. The 9 in the former Ameritrust Tower. On the day the 29-story tower opened to new residents, the building was already 90 percent leased.

In Central, housing occupancy is at 96 percent and hundreds more housing units, including some market-rate housing, are coming thanks to the Cedar Extension development. And as Chinese and other Asian ethnic groups flood into America for college educations, Cleveland’s Asiatown population has also grown.

Downtown’s population has grown 88 percent since 2000, hitting an all-time high this year of 12,500 with more than 1,000 residential units under construction and another 1,100 units planned, DCA reports. Downtown’s population will soon exceed 15,000 larger than 32 of 57 Cuyahoga County municipalities.

Ohio City’s population has stabilized at 9,200 residents as has Tremont at 8,000. Central is rebuilding its way past 12,400. While Asiatown, which comprises much of the officially named Goodrich-Kirtland Park neighborhood, saw its total population dip 5 percent since 2000 to 4,100. But its Asian population grew 14 percent, according to Census data. That’s a core-city population of 37,000.

An even stronger downtown will lift surrounding neighborhoods. More residents means more purchasing power which means more jobs. The size of the growth still to come is potentially immense.

“A tsunami of young people and retiring Boomers has created demand not for three- and four-bedroom houses, but for smaller spaces,” said Scott Bernstein, president of Chicago’s Center for Neighborhood Technology, at the Sept. 12th annual meeting of the Northeast Ohio Areawide Coordinating Agency.

If national demographics apply to the Cleveland metro area, even if generally, then half of the metro’s population is a potential customer for a center-city housing unit. How did I come to that conclusion?

Half of the nation’s population is either a Baby Boomer (retiring & possibly downsizing) or a Millennial (more interested in place & technology, less into driving). But more so, a 2013 survey by the National Association of Realtors showed the nation roughly evenly split between those favoring smart growth, new-urbanist land uses (47 percent) vs. a single-family, detached home with a large yard (52 percent).

Although center-city rents are rising, they are still less than what is necessary to develop new-construction housing on prime downtown land without subsidies. Most residential units being added downtown are the result of converting obsolete office buildings that qualify for historic preservation tax credits from the state. Virtually all of downtown’s obsolete office buildings have been converted, are under redevelopment or have plans to be converted. Once that supply runs out, rents may be high enough to support new construction without subsidies.

For that reason, downtown Cleveland is actually lagging behind many busier apartment markets. Developers would need to add 3,800 more units next year than currently are planned, according to Axiometrics, a Dallas-based apartment consultancy.

“I think the downtown residential rental market is severely undersupplied for a metropolitan area of this size,” said Scott Wolstein, a principal in Wolstein Group, as quoted in a Sept. 29, 2013 Crain’s Cleveland Business article.

In the same article, Developers jump on rental demand, developer Ari Maron said that for a metropolitan area of 2.1 million, the central business district should possess at least 1 percent of the region’s population – or 21,000 residents.

Indeed, developer Bob Stark, who is pursuing his new-construction nuCLEus development on a big parking lot at East 4th Street and Prospect Avenue, once said ?it’s not difficult to convince 1 percent of any group of people to do anything. That was in reference to achieving the city’s goal of 25,000 living downtown. He added that convincing the next 2 percent of people is even easier than convincing the first 1 percent, and the next 3 percent and so on. It’s an exponentially growing momentum, Stark said.

Along with that growth comes more shopping options, including the 30,000-square-foot Heinen’s grocery store at East 9th and Euclid Avenue that will open in February. More 24-hour restaurants and convenience stores will arrive. Someday there could be a City Target, a Staples, an Apple store or other options.

Each core-city neighborhood has room to grow to tap into the immediately available market within the metro area which is mobile and in a transition period in their lives. It doesn’t mean that one of those core city neighborhoods will win the lion’s share. It means that if downtown and its immediately surrounding neighborhoods go from being home to 0.5-1 percent of the metro population to up to 1-2 percent the metro population, then we’re looking at 25,000 people downtown and another 75,000 people surrounding it.

And these areas won’t just draw population from the metro area, but from the nation and the world. But there will be a shift in emphasis from suburban to urban. Why? Because it’s already underway and there’s no sign of it stopping.

A sprawling factory complex on Cleveland's near-East Side is proposed to be demolished by its owner of the last 130 years, General Electric (GE).… 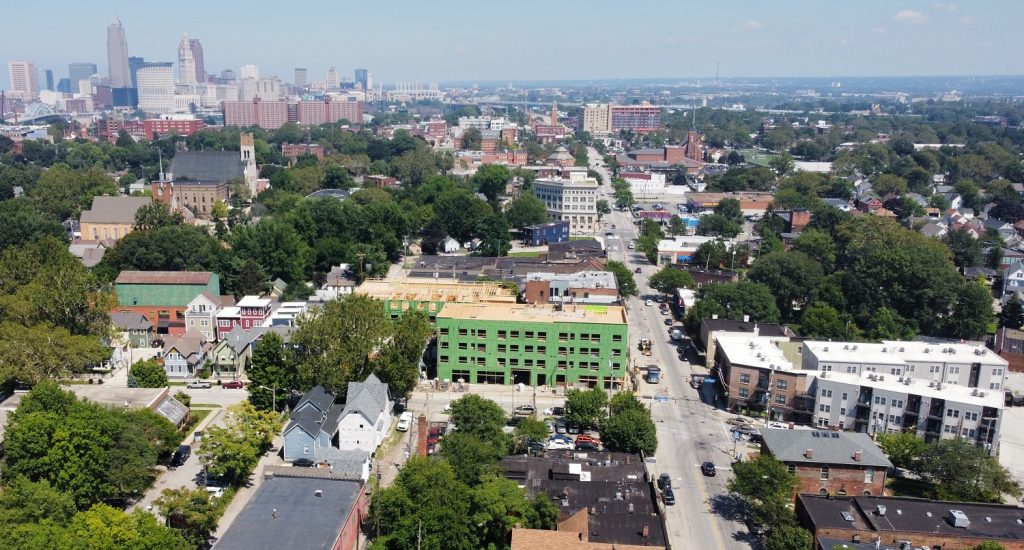 Cleveland-Cliffs' logo may not be on the façade of 200 Public Square in downtown Cleveland for much longer. In several years, the HQ of…

1 thought on “Cleveland’s urban core only starting to reawaken”