More developments are cozying up to the Greater Cleveland Regional Transit Authority’s (GCRTA) Red Line and station in Cleveland’s Ohio City neighborhood. The scope and scale of the planned developments are unlike anything that’s been built along Cleveland’s underutilized rail transit system, outside of the downtown area and University Circle. The lack of dense developments around rail stations has a direct correlation to the usage of the rail system. But that’s starting to change.

In 2019, construction will begin on the 2-mile, $6 million Red Line Greenway trail from near the Zone Recreation Center at West 53rd Street to the bluff overlooking the Cuyahoga River above Franlkin Ave. It will be on the south/east flank of the Red Line tracks, in some cases within a few feet of them.

But if you don’t think that stunning scale of development is enough, then you’re in luck. Because there’s more:

Look for an announcement in 2019 regarding the former Brickhaus Towers/One Twenty West development, first proposed by Andrew Brickman. With a lot on his plate already, a larger, more prominent local developer is seeking to take over this site to deliver as many housing units as possible to the booming near-West Side. Sources asked that this developer not be named publicly as the company doesn’t like to announce a project unless it is more than 90 percent certain the project will happen.

That, of course, means this project is far from certain. But this site is in a prime location. It’s across Lorain Avenue from the GCRTA station, has an unobstructed view of downtown, is a short walk to the West Side Market and the West 25th business/restaurant district, and is next to the Towpath Trail plus the planned Red Line Greenway. The Scranton Peninsula development will be down the hill along the Cuyahoga River and won’t block the views here.

Furthermore, the new developer will likely go back to something like Brickman’s original vision for this site — a larger-scale mixed-use development with mid- to high-rise towers offering 500-600 apartments with ground-floor retail and live-work units facing Lorain. Brickman scaled back the project in his last conceptualization. The new developer is not concerned about the scale of this project, citing increased interest by New York City investors in Cleveland and its newfound job growth.

Last but not least is the development of GCRTA-owned land along Columbus Road, above the Red Line and the planned alignment for the greenway. In the hopes of attracting a “high-quality, dense, mixed-use, transit-oriented development,” GCRTA publicly issued a request for qualifications (RFQ) from developers so that a selection committee could choose the most capable company to whom the authority could sell or lease its land. The deadline for developers to respond was Oct. 11.

GCRTA Real Estate Manager James Rusnov said in an e-mail to All Aboard Ohio, a non-profit that advocates for better public transportation and more transit-oriented development, that it won’t reveal the identity of the winning bidder or how many responses GCRTA received to the RFQ until after a development agreement is submitted to the GCRTA board. That probably won’t happen until February or March of 2019.

However, a neighborhood rumor is that Sam McNulty, a proponent of mass transit and biking, is very interested in developing this property. His Duck Island 7 development at Columbus Road and Abbey Avenue, with townhomes selling for $500,000 to $600,000 each, is nearly sold out. And, on Nov. 3, McNulty posted on Instagram a photograph of a large roll of construction blueprints to be submitted to the city’s Building Department for a large development. He pledged to “announce the details soon.”

An architect’s name was visible on the blueprints – Dimit Architects, which designed McNulty’s Duck Island 7 project. Dimit sources refused to identify the project associated with those blueprints, deferring to McNulty. Considering that McNulty referenced getting building permits from the Building Department, they aren’t for the GCRTA property. Its sale is still months away from being approved by the RTA board.

Cleveland City Council on Oct. 17 voted unanimously to rezone multiple parcels of land in the fast-growing Duck Island neighborhood (see map above). It followed the creation of a development masterplan based on public input. The land along the west side of Columbus Road, from Lorain to West 25th, was rezoned from semi-industry to “multi-family G-1” which allows a range of residential uses, from single-family homes to apartment buildings. The maximum square footage of a building on a property zoned G-1 is three times the lot area and can be up to 35 feet in height based on the street frontage. However, the Red Line right of way below Columbus Road is 25-30 feet lower.

Rusnov noted that the GCRTA-owned land that is the subject of the RFQ is south of Abbey, measuring 85 feet by 700 feet. That brings it to the vicinity of the Wiley Avenue intersection. The land north of Abbey, next to GCRTA’s Ohio City station, is not part of the RFQ because Rusnov said it is where an ADA access ramp to the greenway will be located.

GCRTA’s RFQ stipulates that developers have the option to request additional land if a larger project is proposed. However, Rusnov emphasized that the Red Line Greenway is “distinct from the development site and is fully contained on a separate parcel of land.”

Property south of Wiley isn’t part of the RFQ because the GCRTA right of way widens in that area. It adds a third track that serves as a Red Line maintenance siding. A greenway ramp to/from West 25th will also be located south of Wiley. And, long term, the Duck Island masterplan proposed an extension of Monroe Avenue over the Red Line tracks and greenway to Columbus Road. That will allow the removal of Columbus Road’s dangerous, angular intersection with West 25th and open up a multi-acre site for future development.

Increasingly, as living, working, shopping and playing becomes more popular in Ohio City and the adjoining Duck Island neighborhood, space is going to be at a premium — especially near high-capacity public transportation stops like rail stations. Indeed, these latest developments show how much in demand this area is becoming. 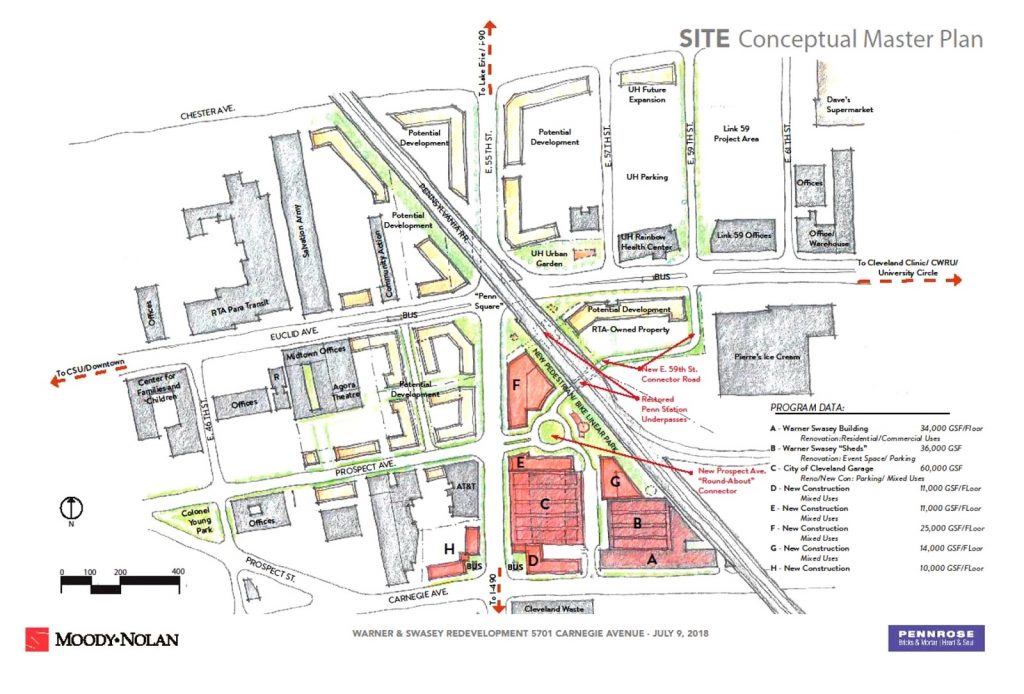 Much of the rebuilding in Cleveland's Midtown, between downtown and University Circle, has focused along the parallel east-west roadways of Euclid, Carnegie and Chester… 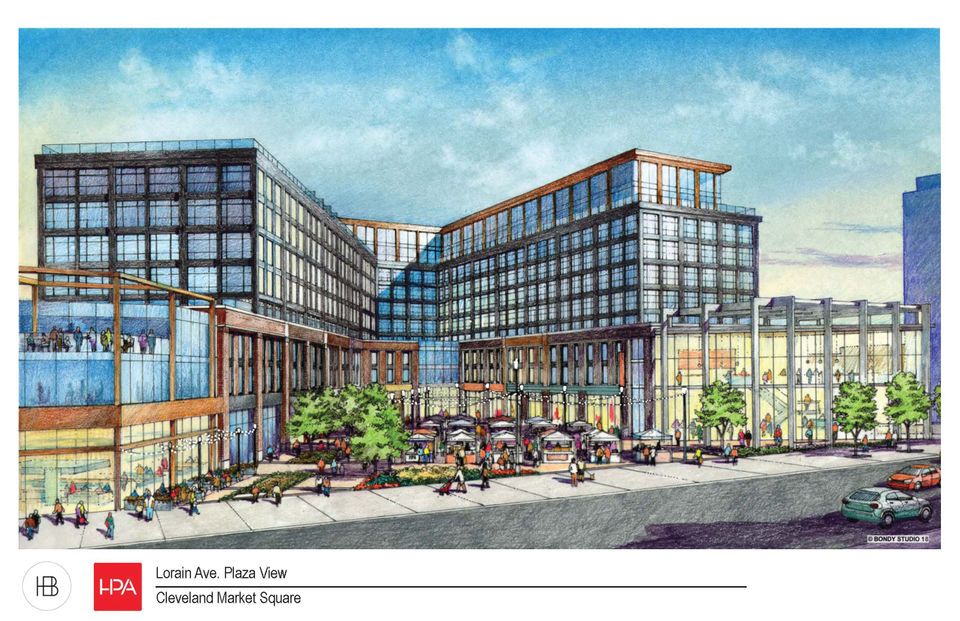 Like a tree at risk of getting chopped down, a $175 million development in the heart of Cleveland's Ohio City neighborhood was in danger…