Greater Clevelanders’ favorite past-time is to complain about the weather. But somewhere in their top-five of complaints is probably the attractiveness of our downtown lakefront. As I write this, several projects proposed for the lakefront are in active discussions by community leaders and appear to be competing for the same pieces of real estate.

They don’t need to. In fact, when combined, they provide complementary uses and can tap funding resources that make them more likely to occur — and possibly in short order, depending on political will.

The projects, in no particular order, are:

What’s even more important is that, when built out, they improve the likelihood for more development, more resources for lakefront investment and better lakefront access to push publicly accessible land uses right to the water’s edge.

But first, two physical impediments need to be defeated…. The Shoreway highway and the lakefront railroad tracks. Better yet — turn them into a means to better access the downtown lakefront and to increase the value of it. The funding already exists to do these things, although they’re being used for two other things for a few more years — construction of the Gateway sports complex and First Energy Stadium. Yes, these 30-year funding mechanisms have been on the books a long time and are about to become available again.

About $8.8 million per year in Cuyahoga County revenues will no longer service Gateway bonds after 2022. And nearly $10 million per year in City of Cleveland revenues will no longer service First Energy Stadium bonds after 2028. If these revenues, including a renewal of sin taxes, are used to retire new, 30-year bonds offering 2 percent yields, they could offer, in total, $425 million for lakefront improvements.

Existing convention center funding isn’t considered for this conceptual proposal. The reason is that the existing convention center bonds, which mature in 2027, are entirely supported by a 0.25-percent sales tax hike passed by the Cuyahoga County Council. It would have to be renewed by the council and probably will be. My guess is that it will be tapped to finance construction of a new Justice Center.

Best of all, the city/county already have the funding in hand to start the preliminary engineering and environmental clearances to prepare a shovel-ready plan — that is, if they don’t cast it aside for a project that fails to change the game of the lakefront. There’s about $20 million left from the ill-fated idea for an open-air, cable-stayed pedestrian bridge over the lakefront tracks and Shoreway. With this money, the city and county could jointly issue a request for proposals to design a a truly game-changing, shovel-ready plan in a matter of months, if they wanted.

By including a multi-modal transportation center for Amtrak, Greyhound, Greater Cleveland Regional Transit Authority (GCRTA), and other transit agencies in this mix, it offers federal funding resources. The Northeast Ohio Areawide Coordinating Agency has $71.4 million total available from the Surface Transportation Block Grant Program (STBG) through 2024 with probably more thereafter.

Also, the Federal Railroad Administration (FRA) has two grant programs that are applicable here — Consolidated Rail Infrastructure and Safety Improvements and the Federal-State Partnership for State of Good Repair Program. Combined these had nearly $590 million available in 2018. Congress is increasing funding for these programs. Federal funds should be pursued to pay for at least half of certain public improvements to make our lakefront more attractive for private investment and more enjoyable as a public space.

Federal funding (and Ohio Department of Transportation System Conditions funding) is not proposed for converting the Shoreway into a boulevard. The reason is that the Federal Highway Administration will not support a project that reduces a highway’s Level Of Service, based on the fluidity of traffic.

Since the revenues for the county and city bonds become available six years apart, the lakefront improvements could be pursued in two phases — transportation infrastructure first, followed by multi-modal center/convention center/hotel next. 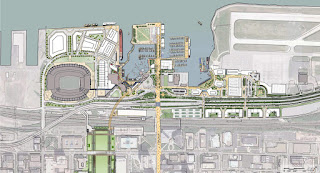 With the Shoreway converted from a grade-separated highway into an at-grade boulevard with intersections, several new streets will be needed to be built or historic ones restored. These can be done with tax-increment financing (TIF) as development occurs next to the boulevard.

Not included in the above calculus is the fiscal impact of lakefront development (aside from a proposed hotel). With about 26 acres opened up for lakefront development along the new lakefront boulevard, more than $100 million in TIF-supported infrastructure improvements (new/rebuilt streets, sewers, sidewalks, bike routes, etc) along and near the boulevard could be afforded. These investments should further improve pedestrian and bike access within downtown and with the lakefront. And they should lead to development of waters-edge sites which are more isolated now.

The lakefront bypass for Norfolk Southern’s general/hazardous freight rail traffic involves reactivating a once-busy rail corridor through the North Broadway neighborhood. Now owned by Norfolk Southern, the former Erie Railroad runs from near GCRTA’s East 34th-Campus Rapid Transit station, below Interstate 77, above Interstate 490, along Bessemer Avenue, and reunites with Norfolk Southern’s mainline at Union Avenue. Mainline tracks would have to be realigned to offer more gradual curves on connecting tracks at both ends of the former Erie right of way segment.

Lakefront railroad capacity enhancements for existing and future passenger rail services would reduce delays with remaining freight rail traffic on the lakefront and simplify the movement of shipments in and out of the Port of Cleveland. That would allow passenger rail traffic in Cleveland to grow in the near future, making a more developed downtown lakefront more accessible.

Other aspects of this plan include reworking GCRTA’s Waterfront Line into a more user-friendly, connected transportation system. This includes consolidating the stations at West 3rd and East 9th into a single station within the multi-modal transportation center, offering under-same-roof pedestrian connectivity with Greyhound, Amtrak, regional bus services and to nearby buildings including City Hall, convention center and hotels while retaining proximate access to First Energy Stadium and North Coast Harbor tourist sites.

While not funded by this conceptual proposal, the initial diagram includes extending the Waterfront Line as a loop around the east side of downtown, through Cleveland State University, Playhouse Square, St. Vincent Hospital, Cuyahoga Community College, and via low-density land opened up for development. The Waterfront Line extension/Downtown Loop, which was studied in 2000 and was shown to be feasible, could be built for $118 million ($179 million today). A TIF district could be established along its route to finance light-rail construction and operation.

Land would be opened up for development along the route of the downtown rail loop by Greyhound relocating its station to the multi-modal transportation center, and by redeveloping the many surface parking lots and low-level structures along the light-rail route.

The Port Access Road underneath West 3rd Street would be preserved, surrounded by retaining walls so that development could be built above it, offering sufficient overhead and lateral clearances for high/wide loads. And it would be combined with a widened South Marginal Road under East 9th Street. Together, they would also become a multi-modal station access route for Greyhound and regional transit buses separate from stadium traffic.

I hope that this conceptual plan, which actually combines a number of recent and older plans into a single vision for Cleveland’s downtown lakefront, is taken seriously. I believe this plan would help put Cleveland’s lakefront on a path to be on par with downtown lakefronts in Chicago, Toronto and even Milwaukee.

6 thoughts on “Cleveland can energize its lakefront in 10 years. Here’s how…”

Guardians buy land, but no ballpark village yet
https://neo-trans.blog/2022/05/15/guardians-buy-land-but-no-ballpark-village-yet/