Most Downtown Cleveland’s skyscraper builders took a nearly 20-year nap between 1992 to 2010. That was after they finished Key Tower and the Fifth Third Bank (formerly Bank One) Tower and they started the Ernst & Young Tower at Flats East Bank.

In that two-decade span, workers built only one building downtown of 20 stories or more — the 23-story, 430-foot-tall Carl B. Stokes Federal Courthouse Tower on Huron Road next to Tower City Center.

In the 2010s, they were quite a bit busier building skyscrapers. Their work included the 21-story Ernst & Young tower in 2012, 32-story Hilton Hotel in 2016, 29-story Beacon apartments in 2019 and the 34-story Lumen apartments that were topped off before the 2010s ended. Although The Lumen won’t be completed until the end of this year.

Entering the 2020s, early as next year and likely continuing for at least several more years, it’s looking more likely that downtown Cleveland will have as many skyscrapers under construction simultaneously as were built in the entire decade prior. Of course, this depends on the local and national economies. It could be a return of the Roaring Twenties for Cleveland.

Nearly a dozen skyscrapers are planned downtown, along with several more buildings in the 10-19 stories range, and a handful of shorter new buildings. Unfortunately, not all of them are going to happen. Even the most well-thought-out plans go awry for the craziest of unanticipated reasons. Some of these are early on in their planning but already have some meaningful financial backing. 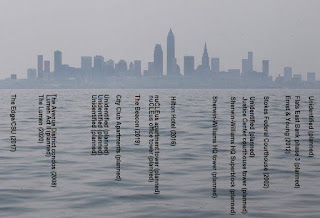 These planned towers are listed in order of the earliest approximate date when they could see groundbreaking:

Now that we’ve ventured into the future, let’s see what got us here. Even the nearly skyscraper-less two decades between 1992-2012 weren’t devoid of downtown construction.

Workers were busy downtown building the baseball stadium and basketball/hockey arena at the Gateway complex until 1994, the Rock & Roll Hall of Fame and Museum in 1995, Great Lakes Science Center in 1996, 18-story Crittenden Court Apartments in 1996, 14-story Hampton Inn in 1998, Cleveland Browns stadium in 1999, 11-story Hilton Garden Inn in 2002, 10-story Avenue District condos in 2008, plus lesser projects.

And while the 2010s saw four new-construction high-rises built downtown, it doesn’t come close to describing how much construction had occurred there in the last decade. The reason is that most of that construction was actually renovations/conversions of old, obsolete commercial buildings into residential ones.

Consider that, among downtown Cleveland’s 37 residential buildings 100 feet or taller, 21 of those were built as residential or were converted into residential since 2010. Only two of those involved new construction.

The supply of historic yet obsolete commercial buildings available for conversion is dwindling yet the market for more housing downtown remains strong. A recent market analysis shows another 6,800 downtown residential units are needed by 2030. To meet that demand would require building the equivalent of another 21 Lumen-sized apartment towers.

Cleveland’s recent job growth and dwindling supply of obsolete commercial buildings is timely. It coincides with new financial tools like the Opportunity Zone tax breaks or that real estate investment trusts are willing to take lower, longer-term returns. And if Ohio approves the Transformational Mixed Use Development tax credit, the floodgates of megaprojects may open up.

So it should be of little surprise that new construction is taking over from what the renovations/conversions started. There would have been more than 20 construction cranes above downtown Cleveland in the 2010s if there wasn’t a large inventory of obsolete commercial buildings to convert into residential.

1 thought on “Return of the Roaring 20s: downtown Cleveland development”