In the absence of renderings or other official news from Sherwin-Williams (SHW), Greater Clevelanders anxiously await the next little tidbit about their planned new downtown headquarters and suburban research facilities.

That little tidbit arrived in the past week, albeit not in a verbal or written form. Instead, it came from crews digging in a part of the downtown HQ site on the northeast corner of West 6th Street and West Superior Avenue. But the work wasn’t for construction — at least not yet.

The crews peeled back the asphalt at that corner to get at the soil underneath — soil that hasn’t seen the light of day since the 1830s when a small brick building was built here. It was occupied by numerous tenants over the years including the Cleveland National Bank, Hoty’s Restaurant and lastly a Money Mart check-cashing business.

It and a three-level parking deck wrapping around it were razed nearly a decade ago by Forest City Enterprises for a future development to be built atop a planned West Side Transit Center that never happened. A parking lot replaced the parking deck and the heavily modified 1830s commercial building that was collapsed into its basement.

With the soil now exposed, it has led to speculation as to why. Some on social media wondered if the HQ construction was starting, possibly for a parking deck to ease the impact on downtown parking. Construction on SHW’s nearly 7-acre HQ site will eliminate 1,100 parking spaces until a new parking deck with several thousand spaces is built alongside the HQ a couple of years from now.

But a search of city records reveals no building permits were issued or even sought for this property. Thus, the site work is likely exploratory and analysis-driven — an educated guess shared by several real estate experts, most of whom were not willing to go on the record.

“It looks to me that they are doing exploratory ground work for better geotechnical (information) and/or where utilities might appear on civil drawings to verify,” said a real estate developer who spoke off the record.

Those same experts said the nature of the soil evaluation work, as shown in photographs shared here, suggests that something more significant than just a parking deck is being considered for this part of the HQ site. That belief was shared by Zak Baris, president of Comprehensive Zoning Services LLC.

“It’s not going to be a parking garage,” Baris said. “I’m willing to bet it’s going to be bigger than a mid-rise building here. To me, that means something up to 20 stories or even taller. The type of soil testing points to that. They (SHW) are doing two big buildings and that is probably the other building.”

Comprehensive Zoning Services has undertaken a dozen large environmental and due-dilligence projects in and near downtown Cleveland in the last few years, Baris added.

More details are slowly becoming available about the scale and cost of SHW’s HQ project. SHW’s main HQ building, possibly rising to be one of the city’s tallest skyscrapers, will likely be built on the so-called Jacobs Lot on Public Square.

And shortly before SHW acquired rival Valspar Corp. of Minneapolis in 2016, SHW pursued an HQ tower on the Jacobs Lot. NEOtrans began reporting on SHW’s current HQ effort nearly a full year before SHW made it official. Jacobs’ and SHW’s efforts generated much geotechnical data about soil conditions and bedrock depths on that 1.17-acre site on Public Square.

Less is known about the rest of the SHW HQ site, comprised of the 5.63-ace formerly Weston-owned Superblock that SHW acquired earlier this year. The Superblock is bounded by Superior, West 6th, St. Clair Avenue and West 3rd Street. So contractors and subcontractors on behalf of SHW began descending on the Superblock beginning in November 2019 to gather sub-surface data.

So if SHW’s 1-million-square-foot HQ skyscraper, rivaling the height of 200 Public Square (former BP Building) and possibly Terminal Tower, is built on the former Jacobs Lot, what might be in the cards for the northeast corner of Superior and West 6th?

“There could be a hotel mixed in there,” Baris speculated. “It makes no sense that there wouldn’t be a hotel in this HQ project. You can control who can come to your hotel if you build it as part of your headquarters.”

SHW needs significant hotel space — and for it to be available when SHW needs it. The reason is SHW will reportedly consolidate into downtown Cleveland the training of employees from SHW offices, laboratories and stores located around the world. Employee training will be for vice presidents, salespeople, information technology, human resources and other on-the-job development.

Right now, much of that training is done in rented offices and classroom spaces at Baldwin-Wallace University in Berea and Case Western Reserve University in Cleveland’s University Circle area, according to sources familiar with the headquarters programming work.

According to data acquired by NEOtrans, the number of people visiting SHW’s seminars and three-day-long training classes would fill more than 100 hotel rooms every weeknight for an entire year. And that number will grow as SHW grows. That doesn’t include contractors and suppliers in town to do business with SHW’s HQ staff.

The site where crews are turning dirt is across West 6th from the Rockefeller Building that has its own development plan pending. More than 400 apartments, including hundreds of micro-units, over four floors of offices and ground-floor retail is planned. However, the building’s sale still has not closed as of yet.

It has been years in the making, but things are finally starting to come together with CentroVilla25. Building permits were filed with the city… 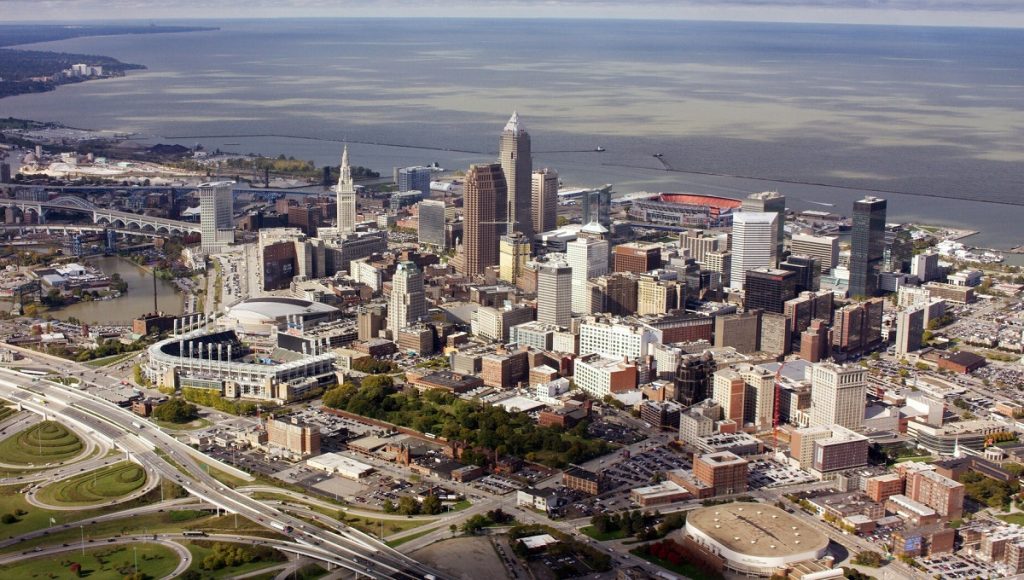 A young, growing biotechnology company is expanding its presence again in Cleveland. Abeona Therapeutics LLC is adding to its production facilities by leasing and…