The next month may be very busy with Downtown Cleveland construction announcements. As a follow-up to my recent posting The Cleveland Skyscraper Building-Binge Starts, it appears that three projects will be making news very soon. One project is a surprise.

Least surprising is that workers this month are swarming over the nine-level 515 Euclid parking garage. Stark Enterprises will soon erect a $62 million, 19-story apartment building called The Beacon on top of it. The workers are construction managers who are mapping out the logistics and sequencing of work to be done over the next 16-18 months. The Beacon, with its 187 apartments, is due to open in late-2018. 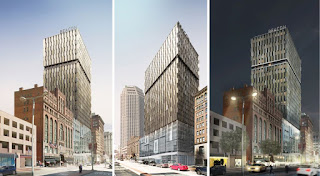 The project faces a small glitch, however. Stark representatives discovered a typo in a variance approved in Sept. 2016 by the city’s Board of Zoning Appeals regarding the height of The Beacon. In 2016, BZA approved a height of 340 feet. Instead, Stark is requesting a height of 355 feet?at BZA’s May 22 hearing. It is possible this glitch will delay the project’s start until about Aug. 1.
________

I’ve also learned from several sources that Medical Mutual’s board of directors will meet June 20 to decide its facilities plan, including possibly a new downtown headquarters. They health insurance company wanted to decide its facilities plan in May but negotiations with the developer/property owner have taken longer than expected. Medical Mutual said it is unlikely it will own its new headquarters, be it an existing building or a new building. The company may seek to extend its leases to strengthen its negotiating stance.

The address or size of its new office building isn’t known, but at least several major Northeast Ohio developers responded to a request for proposals from Medical Mutual last year on new or renovated buildings for Ohio’s largest health insurance company. It is quite likely the public will learn in the next month about the winning proposal. 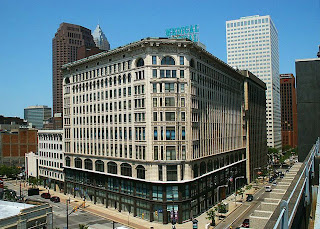 Medical Mutual also is moving forward on a new suburban office, apparently for its Consumers Life Insurance subsidiary based in Strongsville. There will be some corporate consolidations but those may involve its much smaller Beachwood and Copley locations. It isn’t known if the Toledo office is part of the office consolidation plan.

In Northern Ohio, Medical Mutual has these existing offices (lease information according to LoopNet.com):

It is interesting to note that one company, BentleyForbes, owns three of Medical Mutual’s five Northern Ohio locations: downtown Cleveland, Toledo and Beachwood. BentleyForbes purchased them at the same time, in 2000, for $75 million and later took out a $52.7 million mortgage on Medical Mutual’s downtown Cleveland headquarters, the 1905-built, 10-story Rose Building.

After the real estate market crashed in 2008, BentleyForbes has been unable to repay or refinance the mortgage?on the downtown headquarters. About $47 million remains unpaid. BentleyForbes has occasionally been trying to sell its three buildings that are occupied by Medical Mutual. Medical Mutual will reportedly move out of all of their existing offices, and it may move out of all of them at the same time when their leases expire simultaneously in 2020, sources say.

This includes its Strongsville location to which it moved from another location in Strongsville in late 2016. But Medical Mutual will retain a suburban presence, sources said. It is not known where it will be, how many employees will be located there or from where they will come. But the board’s action now allows enough time for constructing new buildings for either the downtown Cleveland headquarters, the suburban Cleveland office, or both.

Finalizing architectural documents, securing government approvals, programming and other pre-development activities for new office buildings will require about a year. Construction will take about 18-24 months. The new-construction timeline fits, albeit tightly, within the timeframe of Medical Mutual’s simultaneously expiring leases. Medical Mutual may seek to stay i
________

Lastly, a proposed skyscraper that seemed a distant possibility may instead leap forward into the ranks of the likely candidates. As early as next month, a national real estate developer will reportedly announce plans for a 34-story luxury apartment tower on a surface parking lot at the southwest corner of Euclid Avenue and East 17th Street, according to two sources.

Development site is on the left, past the gateway arch

The 1-acre property is owned by the Playhouse Square Foundation who in 2011 razed the two-story Hanna Annex?at 1512 Euclid. Later, in 2015, the foundation acquired a mid-lot, 1/4-acre parcel to put the entire lot under one owner. The goal was to encourage development of the lot which was made more accessible after the Greater Cleveland Regional Transit Authority extended East 17th Street south of Euclid to Prospect Avenue. The street extension was part of the Euclid Corridor Project that in 2008 that yielded the HealthLine bus rapid transit.

The Playhouse Square Foundation has been seeking to boost foot traffic in the theater district. It recognized two shortcomings of the district — parking decks are behind and connected to the theaters, meaning that too few theatergoers set foot on Euclid Avenue’s sidewalks to patronize its shops, restaurants and cafes. The foundation also says the district needs more residents — something that is slowly being delivered by local real estate developer K&D Group Inc. K&D recently converted the eight-story Hanna Building Annex on Prospect to apartments and has begun work on the residential conversion on the upper six floors of the 12-story Halle Building.

But the proposed 34-story luxury tower would make a major contribution to the Playhouse Square Foundation’s goals in two profound ways. First, it would add hundreds of moneyed residents to the theater district. And, second, it would add a proposed 600-car parking deck with ground-level retail on Euclid Avenue that requires people to set foot on Euclid Avenue’s sidewalks to reach the theaters. No more sneaking in the back way, sight-unseen.

Much like 515 Euclid, this Playhouse Square tower would be built on a parking pedestal of perhaps five levels high. The foundation requested $4 million from the state’s capital budget in 2016 to help fund the parking deck but got only $1 million. Additional subsidies are usually needed to make the financial numbers work for residential construction. But the more downtown residents there are, the more rents are growing to where fewer subsidies are needed.

Downtown’s residential growth has attracted the interest and headquarters of powerhouse national developer NRP Group, based in Garfield Heights. NRP has chosen to relocate to Playhouse Square, into the lower floors of the Halle Building. The timing of NRP’s relocation is intriguing. NRP is the nation’s seventh-largest developer of apartment buildings. But it’s tallest apartment building thus far is a 10-story structure in St. Petersburg, FL. If NRP is the developer of the proposed 32-story tower, it would mean a new philosophy for the 22-year-old company.

But so does relocating its headquarters and 200 employees from the suburbs to downtown Cleveland. NRP Principal and CEO J. David Heller said in an April 30th press release the company is moving to seize on opportunities for “rapid growth and expectations for further expansion (and for) enabling our employees to fully experience the city of Cleveland and what it offers.” 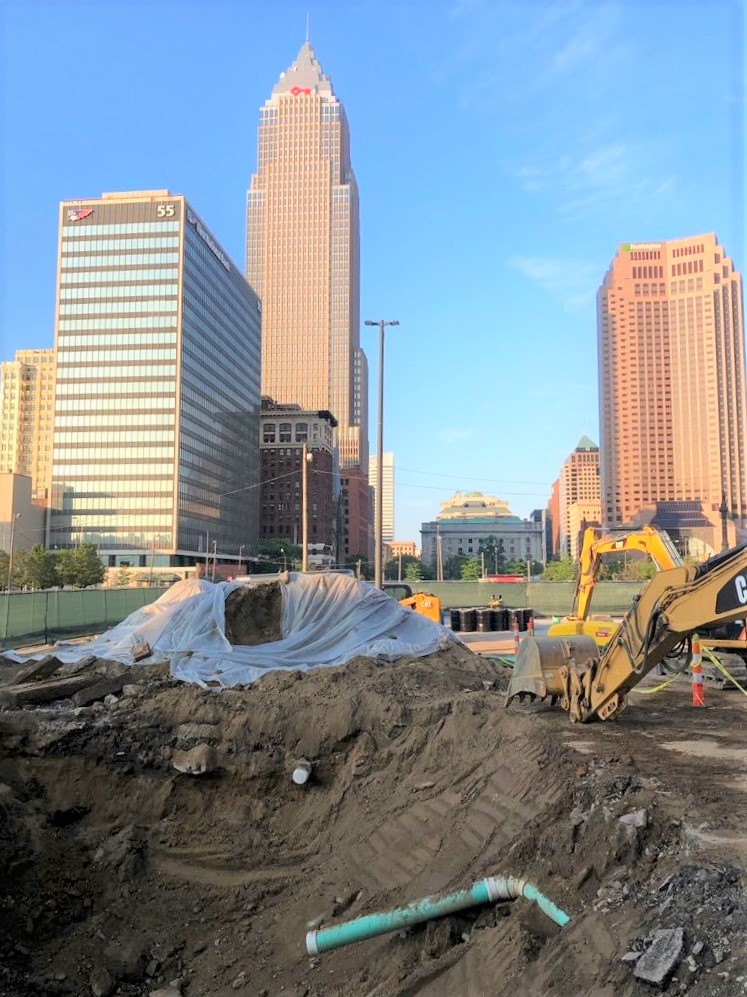 In the absence of renderings or other official news from Sherwin-Williams (SHW), Greater Clevelanders anxiously await the next little tidbit about their planned new…

As long as the Cleveland Clinic Foundation and other local eds-and-meds employers keep adding jobs, new housing is going to keep getting added to… 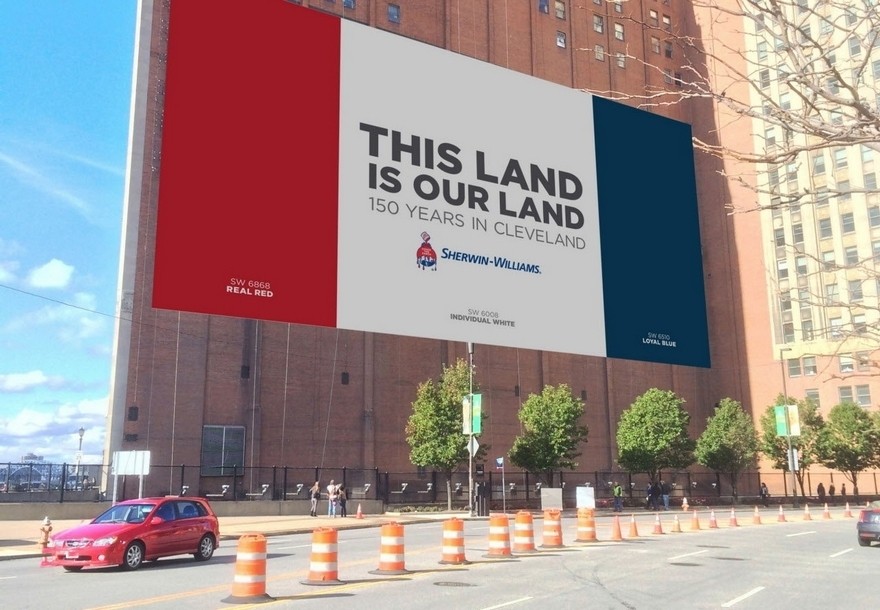