The real estate market in Cleveland and especially downtown is shifting into a whole ‘nother gear.

Growth of the market combined with the advent of new financing tools, plus the dwindling supply of older office buildings available for residential conversion is making significant new construction more realistic.

There’s 3.4 million square feet of obsolete office space getting converted, or about to be converted to residential or mixed-use downtown. When that supply goes, that’s it for a while, unless and until another office user vacates its historic digs (thinking of you, Sherwin Williams, with love).

That’s why there’s four new towers in the works downtown, in addition to the two already under construction — The Beacon (28 stories) and The Lumen (34 stories).

Stark Enterprises’ announcement this week is just the start. Its nuCLEus development has evolved into a more financially viable design, with two 16-story towers (one office, the other residential) atop a eight-story pedestal. It evolved just as the downtown market has evolved. No longer does Stark need as much subsidy to build this long-sought project on land the company owns just north of Quicken Loans Arena. In fact, Stark has most of the financing already in place or pledged.

?The new plan responds to the changing demands of the market and is sized so that the project can move forward immediately,” said Ezra Stark, Chief Operating Officer at Stark Enterprises. “Public-sector assistance is fully supported by incremental tax revenue generated by the project.?

The nuCLEus office tower is proposed to reach 353 feet tall while the residential tower would top out at 310 feet tall. Stark Enterprises’ development plan for nuCLEus was submitted March 7 to City Planning Commission for schematic design approval. Stark hopes to break ground as early as August 2019, according to an official press statement.

Holtzman has offered little fanfare about his plans for the 0.56-acre lot. It’s a site he has so far publicly revealed only to?Crain’s Cleveland Business?last November as his favored location for constructing a high-rise, mixed-use building. Based on City Club’s other projects, the non-residential uses are ground-floor retail and co-working/creative Class A office spaces. Typically, City Club has about 300 apartments in each of its developments. Given the 22,000-square-foot development site, this could be a roughly 25-story building.

Visible progress was noted on March 2 when several drilling rigs were on site to extract core samples for geotechnical analysis to engineer a foundation for a new skyscraper. The last time similar drilling rigs descended on downtown was in September 2015 at a parking lot where The Lumen apartment tower is now rising. Playhouse Square Foundation searched for nearly two more years for a sponsor, financing and a developer for the project, choosing instead to sponsor the project itself. Ground was broken for The Lumen in April 2018.

Will it take 2.5 years before ground is broken for the City Club Apartments? Probably not. Consider that the lowest-hanging fruit among the new-build apartment towers was the first one started this century — The Beacon. Yet this project may have a better shot of happening than when planning started on The Beacon more than five years ago.

The Beacon had the benefit of not having to build any parking because it was built on top of a nine-level parking deck that was mostly full during the day but mostly empty at night. Also, Stark didn’t buy any land to build The Beacon. It formed a partnership with Reuven Dessler, the managing partner of an investor group that owned the 515 Euclid parking structure atop which The Beacon was built.

The City Club Apartments might benefit from a similar arrangement. Thus far, Holtzman has not purchased land from David Goldberg who owns 720 Euclid, the property that has a surface parking lot on Euclid, a surface lot on Prospect and a six-story, 540-space parking deck in between. That parking deck is mostly full during the day but mostly empty at night. Holtzman may not purchase any land and instead form a partnership with Goldberg to reduce his upfront costs.

Holtzman has a knack for reducing costs on developments while also finding hidden value. Thus it is possible that there will be little or no parking added as a result of this development. That could save $10 million+ from the cost of building this project.

There are more reasons why this project has a better shot at happening than The Beacon in 2014. City Club Apartments is a larger company and better capitalized that Stark Enterprises. Holtzman sold an apartment building in St. Louis for $48 million, in part to help capitalize his Cleveland project. The downtown Cleveland real estate market is stronger than when The Beacon was first planned five years ago. And this project can benefit from the Opportunity Zone program which increases liquidity by reducing investors’ tax burdens when they reinvest their capital gains in projects that are in O-Zones. Downtown Cleveland is in such a zone.

Finally, a fourth tower is more speculative but there are growing signs?it has been in the works for a couple of years. For decades Lou Frangos has been known as a parking lot magnate. Last year, he turned the family business over to his son Damon Frangos who is less interested in parking lots and more interested in real estate development.?Last year, The Frangos Group outsourced much of its parking management to Platinum Parking North East to focus on real estate.

In April 2017, through paper companies Prospectus Holdings/II, Frangos acquired 17 parcels southeast of the intersection of Prospect and East 14th. Then, in June 2018, through Travelers Building LLC, Frangos bought two parcels hosting the former Travelers Leather Goods Manufacturing Co. Terms of those deals were not available.

The purchases added to three parcels Frangos acquired in 2000 under the name Caton Court LLC and one parcel acquired in 2007 as 2200 Prospect Parking LLC. So now Frangos owns 3.23 acres of land bounded by Prospect, East 14th, East 18th and the Salvation Army’s Harbor Light complex. The site is less than a block south of The Lumen tower, under construction.

On June 8, 2018, as Frangos closed on the last property acquisition in that block, the company’s Twitter account posted “DOWNTOWN CLEVELND [sic] DEVELOPMENT – THE BIGGEST SURPRISE IS YET TO COME – 2020.”

In recent days, surveyors have been measuring and photographing those 3+ acres from the ground and from nearby parking decks. And, a couple of years ago, about the same time Frangos decided to vastly increase its property holdings in this block, Frangos commissioned drone photography from 300 to 400 feet in the air to see what the views would look like from a building of that height.

Pursuing a development of that scale would be a significant escalation for The Frangos Group whose real estate development experience has been limited to renovating a few existing, historic buildings in Cleveland and Youngstown. It is likely Frangos may pursue a development here in partnership with another developer who has experience with large, new construction projects.

“I see great things on our horizon as we plan to do more real estate development and form strategic partnerships that will make a lasting impact on our city and community,” Damon Frangos said in a 2018 press release.

It will certainly be worth watching. 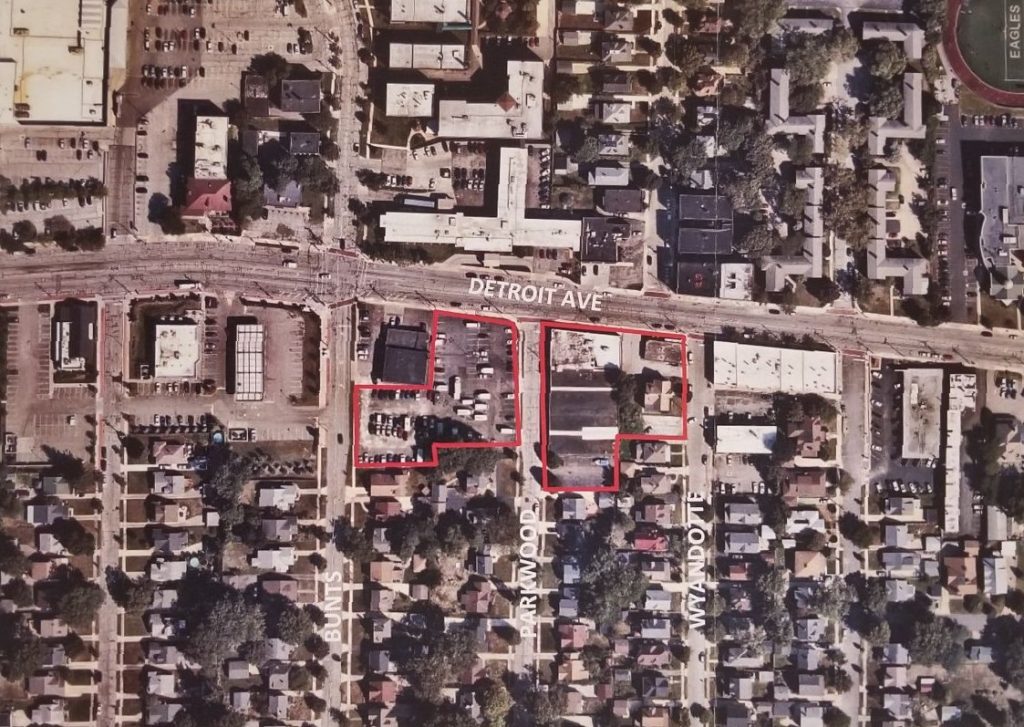 Over the past 30 years, Lakewood has lost more than 1,700 housing units, with only Cleveland, East Cleveland and Euclid losing more. The average…

Four regional projects that encompass 5.7 miles of trail and bicycle connections on Cleveland’s East Side and in Euclid were award federal planning funds…

Greater Clevelanders' favorite past-time is to complain about the weather. But somewhere in their top-five of complaints is probably the attractiveness of our downtown…

2 thoughts on “Four downtown towers are in the works”