The IMG Building sits at the southwest corner of East 9th Street and St. Clair Avenue in downtown Cleveland’s Historic Erieview District. The property is now for sale to satisfy a foreclosure proceeding (LoopNet). CLICK IMAGES TO ENLARGE THEM

An aging but mostly full office building in downtown Cleveland has hit the market at the request of its court-appointed receiver. The 57-year-old IMG Building, 1360 E. 9th St., may be approaching the end of its nearly three-year-long foreclosure case in Cuyahoga County Common Pleas Court.

The building’s owner, real estate broker and investor James Breen of University Heights defaulted on a $16.8 million loan by Wells Fargo Bank on the 15-story, 281,000-square-foot building in July 2019. That was despite the building having a healthy occupancy of 90 percent at the time, but has since dropped to 79 percent, according to listings of available space on various brokerage sites. The foreclosure case went before Common Pleas Court Judge Daniel Gaul.

Receiver Paul J. Downey of Beachwood chose Cushman & Wakefield’s capital markets team in Cincinnati to take the lead in marketing the property to potential buyers. According to Nathan Kelly, managing director of Cushman & Wakefield’s Cleveland office, which operates under the name CRESCO Real Estate, Downey chose to work with the Cincinnati office due to his familiarity with them.

“The capital markets team in Cincinnati has a great relationship with that receiver,” Kelly said. “They will be marketing it directly and they’ve worked with tenants there (at IMG Center) before it went into receivership.”

There is no real estate sale listing for the IMG Center that’s gone live, yet. However, a marketing video for the property was posted yesterday on YouTube by Cushman & Wakefield’s Cincinnati office. NEOtrans sent e-mails with questions to the brokerage’s contacts Zane Fry, Thomas Powers and Michael Sullivan who were listed at the end of the video. Fry and Powers opened the e-mails but did not respond to them prior to publication of this article.

Local real estate brokers who tried to win the opportunity to market the building said they were surprised that an out-of-town brokerage was selected. They also were surprised at the dollar figures being thrown around in the rumor mill for the building’s potential asking price and brokerage fees.

“Pricing expectations (are in the range) of $30-$40 per square foot, which is way below the loan amount,” said Terry Coyne, vice chairman of the Cleveland office of the commercial real estate services firm Newmark. “We suggested a higher price and higher fee but the receiver went with the lower-fee provider. My team believes IMG is worth between $50 and $60 per square foot.”

An asking price of $30 to $40 per square foot translates to about $8.4 million to $11.2 million. Originally, the 2018-issued loan was for $17 million, according to court records. The loan’s remaining principal was not immediately available but is probably near $14 million. According to a letter filed with the court Nov. 2, 2021 by Breen, there apparently was an offer by BHN Associates of New York to buy the building for $18 million. But a Nov. 15, 2021 docket entry shows the purchase offer was quickly rescinded.

The Sausalito On Ninth restaurant on the ground floor of the IMG Center. The building’s lobby is in the background (LoopNet).

Imperial Heating and Cooling also filed suit separately in 2019 and has a lien on the property for an unpaid balance of $48,526.96 for renovation work done in 2018 on Breen’s office in the IMG Center, court records show. Rialto Capital Corp. of Miami has managed the building during the foreclosure proceedings.

Sources also said the tenant for which the building is named, IMG Group, previously known as International Management Group, is in the market for new office space. The global sports, events and talent management company founded in Cleveland in 1960 but now headquartered in New York City needs about 15,000 to 18,000 square feet of space.

Other tenants in the building include financial firms that have left other, Class B and Class C office properties that since converted to residential uses. Ground-floor tenants include Sausalito On Ninth restaurant plus Avalon Document Services. Average rents for the building are $18 per square foot compared to $19 for the overall downtown market, according to the December 2020 Cleveland Skyline report by Jones Lang LaSalle.

Café on the 12th floor of the IMG Center in downtown Cleveland (LoopNet).

The IMG Center is connected to the Lincoln Building, immediately west on St. Clair Avenue, which has 426 indoor parking spaces and access to a sixth-floor fitness center and leasable offices. The Lincoln Building was owned by an investor group led by Breen but sold it in 2016 shortly after the 1917-built structure was renovated.

Since IMG Center is more than 50 years old, it qualifies for historic tax credits if a developer would seek to renovate public areas in the office building to their original 1965 style or possibly convert the property to residential. Except for the ground floor and penthouse level, unfinished ceiling heights in the building are 9 feet high, according to LoopNet. That’s low for modern, Class A office spaces but perfect for residential uses.

Originally built as the headquarters for the Cuyahoga Savings Bank, the IMG Center was one of the many office buildings constructed as part of the Erieview Plan to revive a blighted East 9th corridor. In fact, the building was originally called One Erieview Plaza. The urban renewal district was granted historic status a year ago as the Erieview Historic District, bounded by East 9th, Lakeside Avenue, Chester Avenue and East 12th Street. The district has a few bump-outs in its boundaries to include qualifying historic buildings. One of those bump-outs is for the IMG Center.

Inclusion in the Erieview Historic District recently allowed the 1983-built 45 Erieview Plaza to compete for and win $5 million in historic tax credits from the state. With that December award, the property sold in February and its financing closed so the former Ohio Bell headquarters could be converted into apartments and co-working spaces.

Neither Downey nor Breen could be reached for comment. According to sources, Breen reportedly is more interested in spiritual matters these days and less interested in real estate. He is the son of John “Jack” Breen, CEO and chairman of Sherwin-Williams from 1979-2000 who died in 2019. The Breen Technology Center on Canal Road in the Flats, soon-to-be relocated to Brecksville, is named after him. 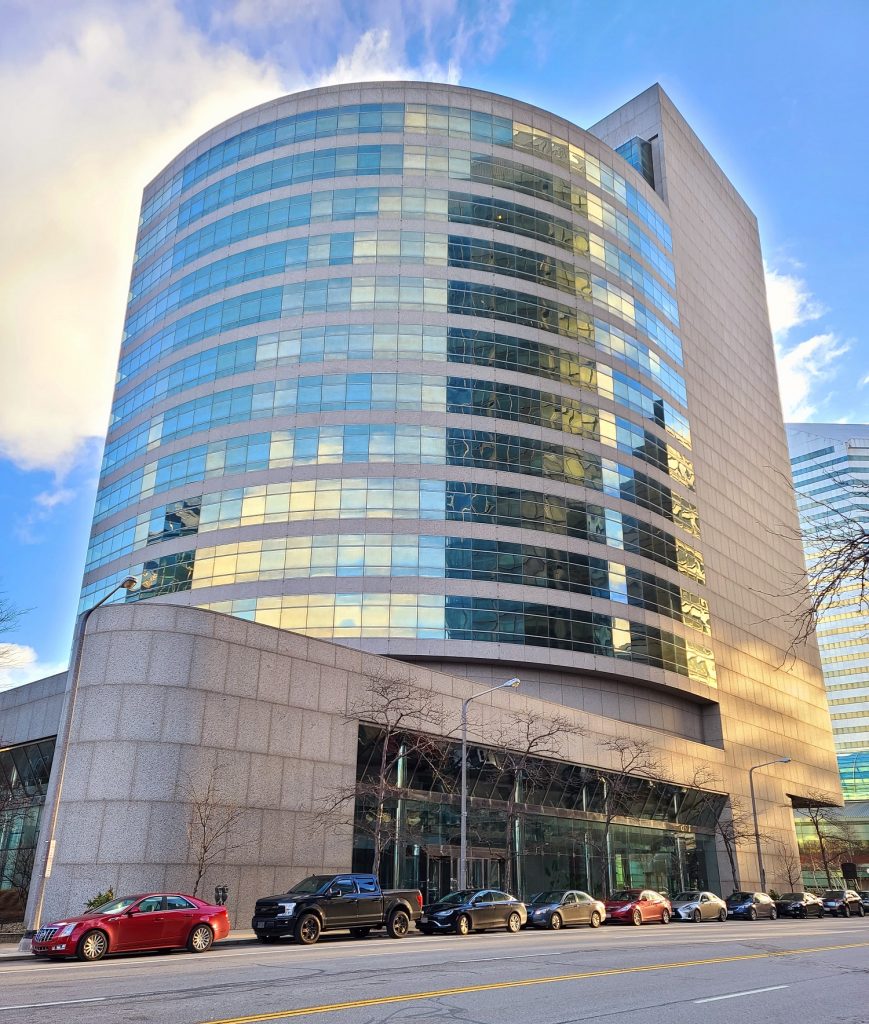 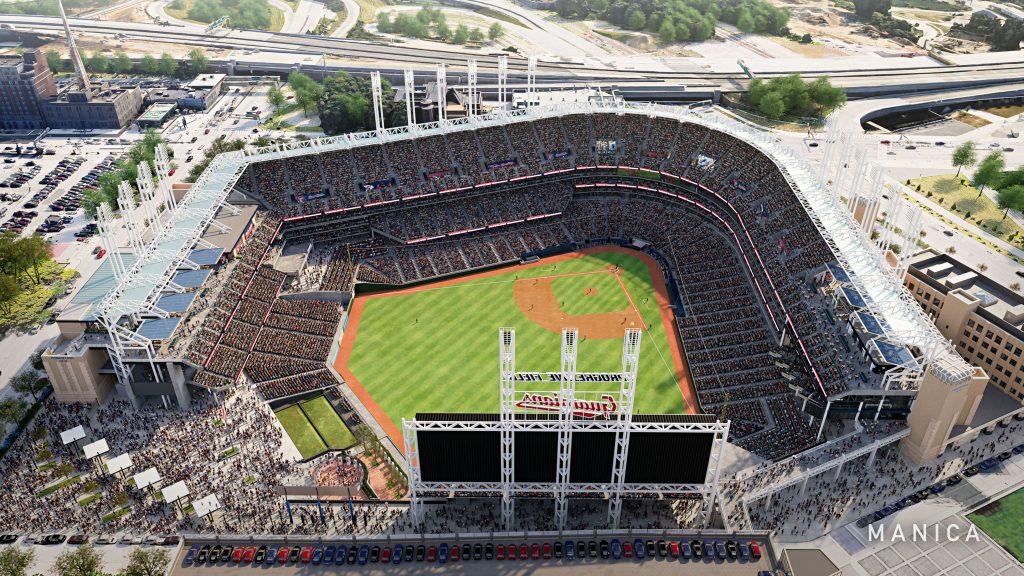