A conceptual rendering of the proposed new Neurological Institute to rise on the north side of Carnegie Avenue between East 89th and 90th streets at the Cleveland Clinic’s main campus in the Fairfax neighborhood. Note the scale of the building by the cars on Carnegie Avenue at the bottom. This image was extracted from January’s State of the Clinic presentation (CCF). CLICK IMAGES TO ENLARGE THEM

Surgery Center to give way to new Neuro Institute

Cleveland Clinic is requesting a demolition permit from the city to make way for the largest building ever to be constructed by the global health care system. The permit requested from the Cleveland Building and Housing Department would allow the Clinic to raze its Surgery Center and adjacent parking garage, at 2083 E. 89th St. at Carnegie Avenue.

A Clinic spokesperson confirmed prior reports published by NEOtrans that the health system’s massive new Neurological Institute will be constructed at the current site of the Surgery Center, called the P Building as well as the PP Building, its associated parking garage.

The 1968-built, eight-story, 160,000-square-foot Surgery Center and its 192,500-square-foot parking garage are located on the north side of Carnegie, between East 89th and 90th streets. Both will be demolished at an estimated cost of $2.4 million, according to the permit application submitted by Stantec Architecture of Cleveland. The new Neurological Institute will be designed by Hopkins Architects of London, England.

According to Clinic sources who spoke off the record, the new Neuro complex will measure about 1.1 million square feet — making it larger than the new Sherwin-Williams headquarters under construction just west of Public Square in downtown Cleveland. Yet the new structure is unlikely to exceed 15 stories, the sources said, and it will utilize the existing 4,000-space East 89th Street employee garage. Clinic spokesperson Angela Smith would not comment on the project’s pending scale as planning is still under way.

Cleveland Clinic’s Surgery Center and garage, also called the P and PP buildings, stand along Carnegie Avenue between East 89th and 90th streets. They are the subject of a demolition permit application to the the city of Cleveland so they can be cleared away for the planned 1.1-million-square-foot Neurological Institute (Google).

“The permits filed are related to the demolition of our P and PP buildings,” said Smith, senior director of corporate communications at the Cleveland Clinic. “This site will serve as the location of our new Neurological Institute building.”

According to Clinic sources, Surgery Center employees were notified last October that they would be relocated elsewhere on the health system’s main campus near University Circle. Most of the workers will be moved to the Clinic’s M and S buildings, with a few going to the A building, the sources said.

“Surgery is not performed in this building,” Smith noted. “It (the Surgery Center) primarily serves as a drop off and pick area for patients having surgery. Planning is still underway, but all operations in the existing Surgery Center will be transitioned to another location on our main campus.”

Originally planned to be 400,000 square feet, the Clinic upped the new Neurological Institute’s space needs to 900,000 square feet last year to account for a change in the Clinic’s outpatient caregiving approach to provide more inpatient care, thus needing more hospital rooms and staff. Also numerous neurological programs would be consolidated from suburban hospitals to the main campus, sources said. But those space needs were increased further to 1.1 million square feet due to programming and planning work done over the winter.

The new Neurological Institute would be bigger than the Clinic’s current square-footage king — the 10-story, 2008-built Sydell & Arnold Miller Family Pavilion, 9500 Euclid Ave., at just under 1 million square feet. At one hospital employee per 400 to 600 square feet, the Neuro building may accommodate anywhere from 1,833 to 2,750 employees.

Currently, the Clinic employs more than 300 medical, surgical and research specialists in its Neurological Institute on the main campus. Within the institute are 16 centers of care each with multiple departments treating different challenges such as behavioral health, cerebrovascular, brain tumor, multiple sclerosis, epilepsy, sleep disorders and more.

News of another potential demolition related to the new Neurological Institute was broken by NEOtrans last November — that of the vacated Cleveland Playhouse (CPH) which includes the former Sears department store. Sources say the structures would be demolished to open up a construction staging area for the new Neurological Institute nearby. However, demolition permit applications have yet to be submitted to the city for that property, 8500 Euclid.

“We do not have any details to share at this time regarding the former Playhouse building,” Smith added. “More information will be provided at a later date.”

Looking generally east on Carnegie Avenue, the former Cleveland Playhouse is at left, the Sears department store is at center-right and behind it is the Cleveland Clinic’s East 89th Street employee garage. Just beyond the garage is where the new Neurological Institute will rise (Google).

The sources said the Clinic is engaging in dialogue with neighborhood and community stakeholders about possibly preserving some or all of the CPH’s structures. The Cleveland Playhouse relocated its performances, rehearsals and supportive activities to downtown’s Playhouse Square in 2011, two years after the Clinic bought the huge 11.3-acre property for $13 million.

Since then, the Clinic has struggled to find a use for the performing arts venue that was originally built in 1927 but expanded and extensively renovated in 1984 into the largest regional theater facility in the nation. The 1984 reworking was designed by world-renowned architect Philip Johnson who was born in Cleveland.

The CPH was incorporated into the neighboring Sears department store that operated from 1928-80. It was one of two Sears urban department stores that had stood in the city of Cleveland. The other was on Lorain Avenue at West 110th Street but was demolished for Westown Plaza. The surviving Sears store was used by CPH for rehearsals and as a shop for the creation and storage of stage sets, scenery, props, costumes and other materials.

Cleveland Clinic is about to embark on a busy facilities construction schedule at its main campus. In addition to the huge new Neurological Institute, the Clinic also expects to start construction this year on a 100,000-square-foot expansion of its Cole Eye Institute at Euclid and East 105th Street, according to the State of the Clinic presentation in January. Perhaps as early as next year, the Clinic also intends to construct a 400,0000-square-foot, $500 million Global Center for Pathogen Research & Human Health near East 105th and Cedar Avenue. 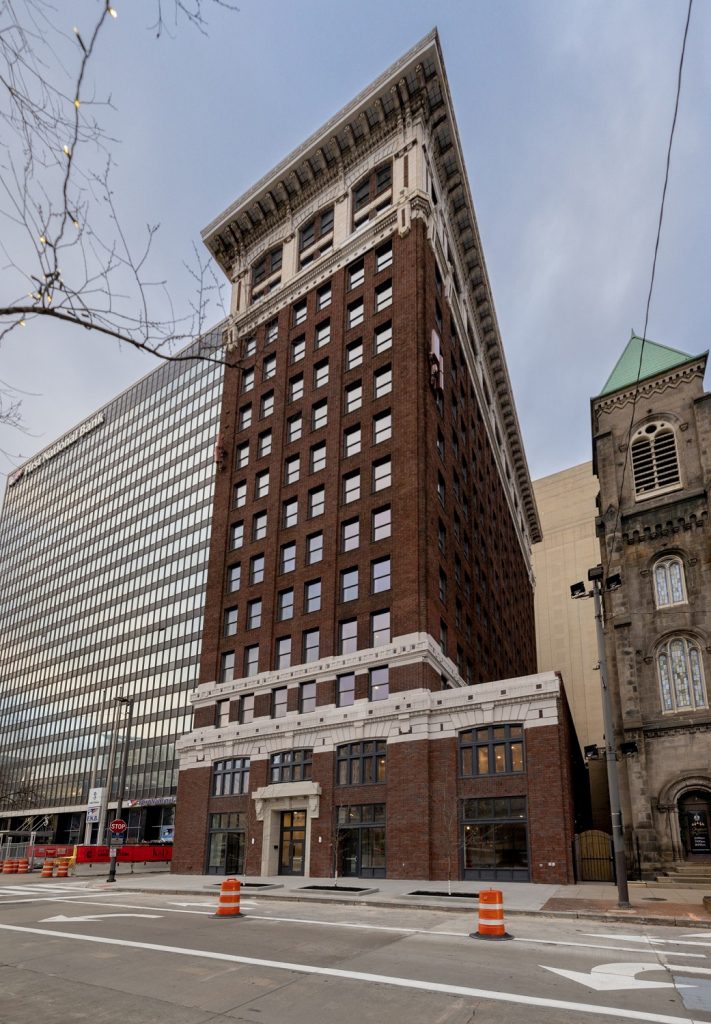 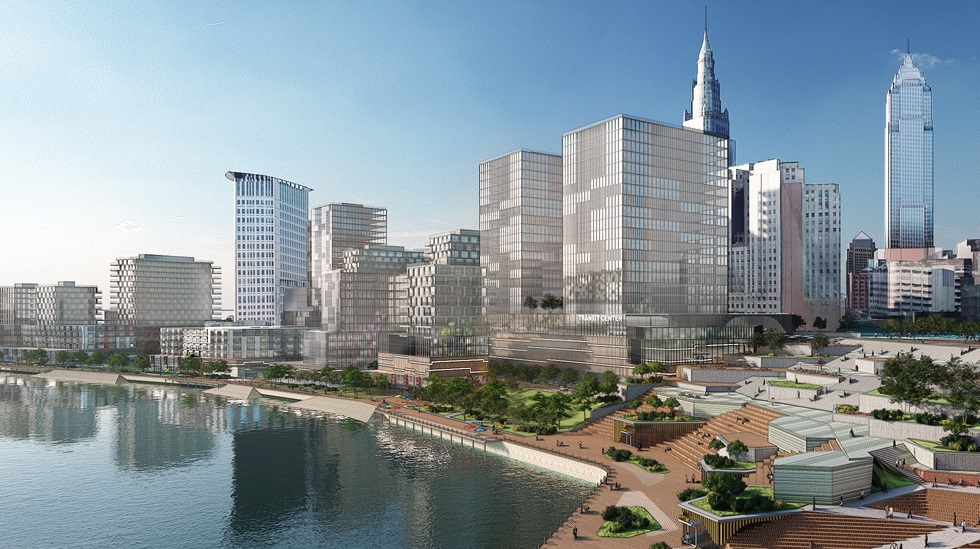 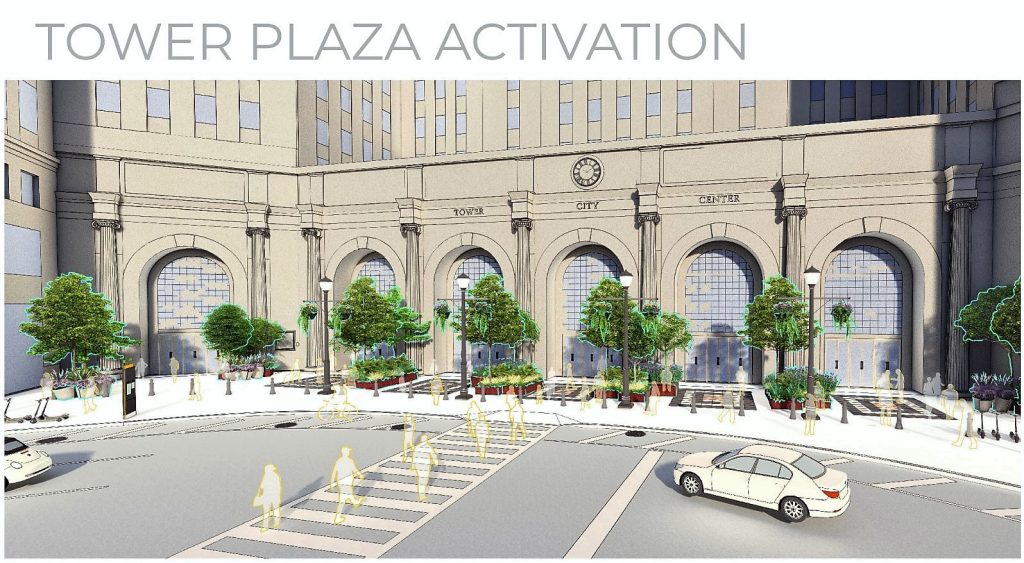 Cleveland was once called the "Forest City" because of its many large, healthy trees along its major thoroughfares. One would never know that today…

4 thoughts on “Demolitions to start for Clinic’s largest building”