Located in the commercial district of historic Brooklyn Centre, the vacant Brooklyn Masonic Temple was acquired by a Lakewood entrepreneur who intends to redevelop the structure with market-rate apartments over two retail spaces facing Pearl Road (Brandt). CLICK IMAGES TO ENLARGE THEM

A Lakewood real estate entrepreneur and construction contractor has acquired the vacant Brooklyn Masonic Temple, 3804 Pearl Rd., in Cleveland and plans to renovate it into a mixed-use building called the Lofts On Pearl. It remains to be seen if the project will live up to the Masonic purpose of making good men better.

Kosta Almiroudis of Almico Properties and Northern Lights Maintenance LLC is the property’s new grand master. He began interior demolition and structural repairs shortly after the first permits were issued by the city for the property back in August. But plans for the Lofts on Pearl received their first public airing this week at the city’s Near West Design Review Committee where they were positively received. They will then go before the full City Planning Commission in January for review and eventual approvals.

“I have had my eye on that building for nine or 10 years now,” Almiroudis said. “I called the number on the sign as soon as I saw it listed for sale.”

Its façade vandalized and darkened with grime, the former Masonic lodge and auditorium awaits its next life in which its next owner may strive to do better than the one before, to paraphrase a Masonic teaching (Brandt).

The Brooklyn Masonic Temple was built in 1926 following the 1917 formation of the Brooklyn Masonic Temple Co. The 25,536-square-foot building, located in the Brooklyn Centre Historic District, fell into disrepair over the past 15 years since it was vacated. But the structure retains its rich wooden finishes, doors and mouldings as shown in a presentation by the development to the City Landmarks Commission last summer.

Almiroudis said the prior owner John McCartney tried to redevelop the Masonic hall with housing too, but had too many other projects going on. McCartney, like a Masonic Tyler, was apparently attached emotionally to the building and wanted to see it purchased by someone who had a similar vision for the property, Almiroudis said.

View of the proposed outdoor courtyard behind the former Masonic hall, as viewed from the McDonald’s restaurant parking lot next door (Brandt).

The two retail spaces measure 930 and 938 square feet; each space will have a lavatory. Preliminary plans for the basement show tenant storage and a future fitness center with provisions made for a lavatory here as well. The building has a basement-to-third-floor elevator. There will also be laundry rooms on each floor and an outdoor courtyard for tenants on the south side of the building.

“We’re trying to cater it to the workforce of Metro,” Almiroudis said, referring to MetroHealth Medical Center located about a half-mile north.

Parking for the property is a bit complicated. The parking next to and behind the building belongs to the neighboring McDonald’s which has a total of 54 spaces around its restaurant. Ironically, the 32 parking spaces on the north side of McDonald’s that are adjacent to the Brooklyn Masonic Temple would be one shy of what is necessary for the Lofts On Pearl to meet the zoning code.

Instead, the 33 parking spaces will be provided in a lot to the north, across Garden Avenue behind the Bethlehem Temple of Praise Church, 2705 Archwood Ave. Access to the parking lot has been from Pearl or from Archwood, through the church’s property. Since direct access between parking and tenants is required by the city, Lofts On Pearl tenants would access the parking via a new driveway built from Garden. That would involve securing city permission to demolish a 122-year-old house Almiroudis owns at 2806 Garden under the name Flats On Pearl, LLC. The same firm also owns the parking lot, according to public records.

Site plan for the Lofts On Pearl, including its parking lot to the north of the former Masonic lodge, across Garden Avenue. The lot has been used for the Bethlehem Temple of Praise Church and for tenants of storefronts along Pearl Road (Brandt).

Fortunately, Almiroudis is required to provide only 33 parking spaces. Had the Pearl Road corridor not been rezoned with an urban form overlay, he would have had to provide 43 spaces which might have required demolishing a couple of single-level storefronts at 3784 Pearl. However, he said he plans to do that anyway in the long term, replacing it with a new mixed-use building offering residential over storefronts.

Almiroudis said he also tried to acquire the three-story, historic brick building at the corner of Pearl and Garden. But the owner, John Hickey, apparently has been non-responsive to his overtures. Hickey has a law office in that building which he has owned since 1974. He also owns several homes to the west of it along Garden, county records show. Almiroudis said Hickey is in his 90s. NEOtrans attempted to contact Hickey several times this week but there was no answer at his law office phone number.

Cuyahoga County property records show Almiroudis acquired the former Brooklyn Masonic Temple in July for $200,000. At the same time, he bought the parking lot property across Garden which includes the Pearl storefronts for $150,000. The Garden house was purchased in October for a mere $15,000.

Repairs to the Masonic auditorium, including a new roof, are well underway. This is the third floor of the auditorium wing. All three floors of this wing, as well as the front part of the building, will have apartments (Brandt).

Since then, Almiroudis has been busily working on the former Masonic hall. The work included removal of old drywall, plumbing and electrical wires, roof repair, removal of non-bearing partitions and a temporary board-up of the building. Value of the work according to a city permit is $50,000.

Almiroudis, who was born in Greece and lived in New York City before coming to Greater Cleveland, began buying and renovating undervalued properties after the Great Recession of 2008. He started in Lakewood and expanded into Cleveland, focusing mainly on historic properties that needed fixing up.

One of those Cleveland properties was the former Denison Park apartments on Forestdale Avenue, across Pearl from the Masonic hall. He and a partner acquired that property at a sheriff’s sale in 2015 for $2 million, fixed it up and renamed it the Brooklyn Gardens. They sold it in July for just over $2.6 million, county records show. It is now called The Brooklyner Bay Apartments.

Today, iHeartMedia Cleveland announced plans to move their regional office to downtown Cleveland. The new location will be at 668 Euclid Ave. and will… 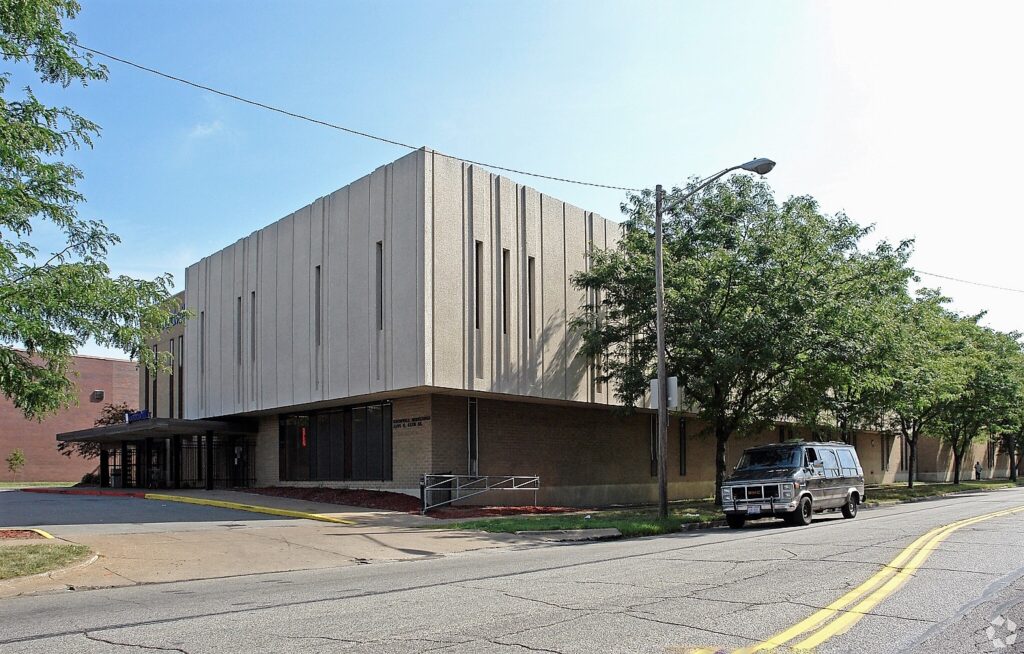 After months of work, Bedrock Real Estate of Detroit and its masterplan architect David Adjaye Associates of Ghana today released their vision for the…