Construction may start by year’s end

City Planning Commission today voted to support the final design of a large mixed-use development called Stokes West in Cleveland’s University Circle after nearly a year of debate over the fate of six historic but neglected rowhouses. The project’s landscaping plan still has to reviewed by the commission but today’s vote puts the development on a path to secure a building permit and start construction, possibly by the end of the year.

Proposed is a nearly $40 million, 261-unit residential complex on a triangular, 2.2-acre site that will continue to be owned by the nonprofit University Circle Inc. in the 2100 block of Stokes Boulevard. The project will have 255 apartments into two buildings — one eight stories tall and the other seven stories — over ground-floor mixed uses including a coffee/wine bar and co-working spaces. And along Cedar Avenue on Stokes West’s south side will be six new townhomes.

Those were part of a design addition revealed last month when schematic plans for Stokes West were approved by the commission. The commission on July 1 also approved demolishing the six historic rowhouses. The brick, century-old homes were taken down exactly one month later, creating a cleared, development-ready site for Brent Zimmerman Development, Rust Belt Development LLC and equity partner ACRE of Atlanta and New York City which also owns and manages 10,000 housing units nationwide. Zimmerman today confirmed the project is 100 percent fully financed.

Six neglected Cedar Avenue rowhouses built a century ago were demolished earlier this month to make way for the Stokes West development (Mov2Ohio/UrbanOhio).

Other project partners include two Cleveland companies — LDA Architects and civil engineer Donald Bohning & Associates. NEOtrans broke the story about the proposed Stokes West development in September 2021 when the community development corporation University Circle Inc. agreed to lease the triangular site to the Zimmerman-led partnership. Zimmerman is probably best known as the CEO and co-founder of Saucy Brew Works which started in Ohio City.

“One of the things we worked on, specifically with the Fairfax community and (Fairfax Renaissance Development Corp. Executive Director) Denise VanLeer and her team, is her ask of us to replace (the rowhouses) and reactivate Cedar,” said ACRE Development Manager Jeff Goldstein.

Development team members touted Stokes West’s affordability, compared to competing apartment buildings of similar size built since 2015. They intend to offer average rents of $1,395 for studios, $1,595 for one-bedroom apartments and $2,495 for two-bedroom suites. Those rents are 13 to 21 percent less than their competition. There will also be 12 dedicated low-income-restricted units. Two-thirds of the units will be furnished studios with rents that will be affordable at 80 percent of the area’s median income, Goldstein said at last month’s commission meeting.

“There’s not a lot of (development activity in this area,” said Ward 6 Councilman Blaine Griffin. “Those rowhouses have been sitting abandoned for a while. I understand that there’s a concern about if we’re doing demolition by neglect. But I will tell that that’s the case for a lot of different rowhouses and properties throughout the city of Cleveland. We do have a significant development going up on (East) 105th and Cedar which is a Meijer supermarket. We’re trying to bring more density and really activate that corner with workforce housing, with affordable housing as well as market-rate offerings in that area.”

There is also a lot of development happening to the north of where Stokes West will rise, including what is now University Circle’s tallest building — the 24-story Artisan Apartments, 10600 Chester Ave. It is part of the massive Circle Square development which is adding the 11-story Library Lofts, now under construction at 10555 Euclid Ave.

City Planning Director Joyce Huang said the Stokes West site may not need as many parking spaces. The development is located within one block of an existing, high-frequency transit corridor, the Greater Cleveland Regional Transit Authority’s (RTA) HealthLine, and one block of another that’s proposed, Thrive 105. That transit corridor will travel on East 105th Street, East 93rd Street and Woodhill Avenue. Plus the Red Line’s Cedar-University train and bus station is 10 minutes away. And it’s a few minutes walk or bike ride to many employers and classrooms in University Circle and Fairfax. 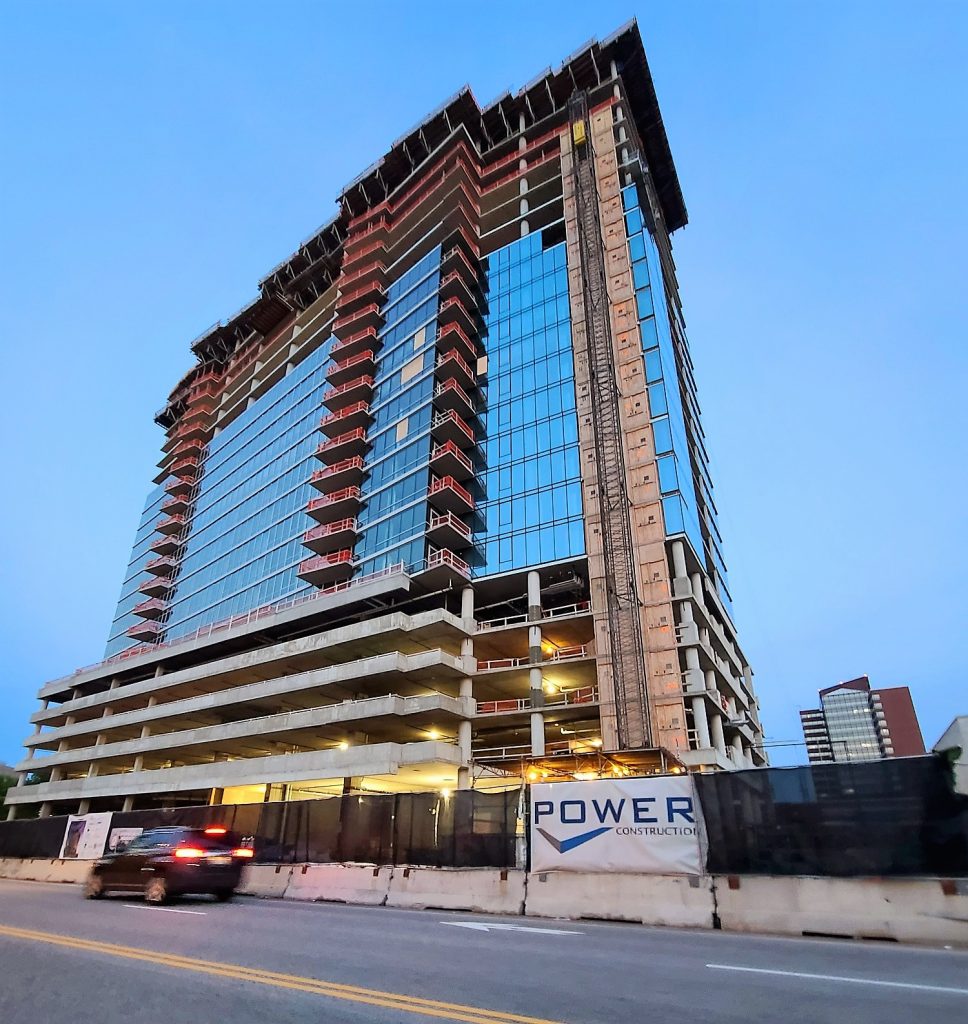